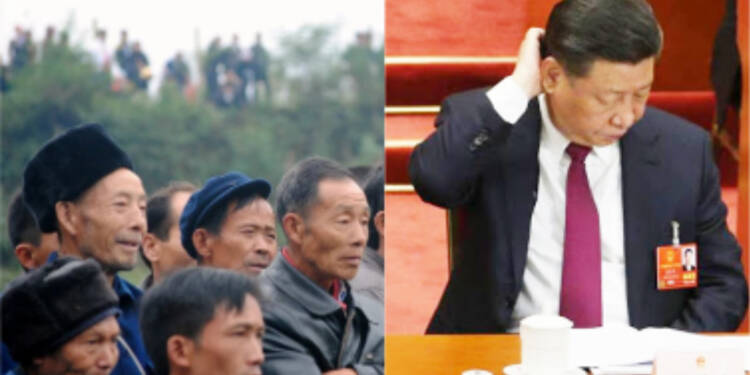 As income inequality in China continues to grow, resentment of the poor people against the Chinese Communist Party is rising. The country that claims to build a socialist society has a Gini coefficient of 0.482, around 56 per cent more than the European Union.

Regional income disparity is very high with coastal China being most affluent and country land regions such as Xinjiang and Tibet being one of the poorest in the world. Millions of migrants move to urban areas in search of jobs every year and they are forced to live in underground homes, popularly known as rat houses. The migrant workers who live underground are referred to as “rat tribes”.

After the Coronavirus lockdown, millions of Chinese workers lost jobs and were forced to return to villages. Even in the cities, their life was miserable and therefore they do not even want to return back. Moreover, the authoritarian Communist government rubbed salt on their wounds by releasing the water stored in reservoirs after the flood had hit the country a few weeks ago. Farmlands and houses in Jiangxi, Hunan, Anhui, and Hubei provinces were flooded in order to save cities and this further angered rural Chinese people.

Many flood-victims from the Jiangxi and Anhui provinces blame the local CCP authorities. The victims noticed that water is secretly discharged at night in order to alleviate the threat of floods in urban areas and sacrifice villages instead.

“Xi also called for efforts to guarantee the interests of farmers, to make sure the rights of farmers to contract land of collective ownership in accordance with the law remain unchanged, and the land contracted by rural households to be kept stable,” reported CGTN, the state-owned Chinese media house.

For decades, rural Chinese people have been fooled in the name of nationalism. The Chinese Communist Party forces them to make ‘sacrifices’ for the welfare of the cities and does not deliver any socio-economic benefits to them.

In fact, the farmers in China are taxed more than the urban households, while in India, farm income is tax-free. “If we discharge smoke, we have to pay a pollution tax. When we get married they tell is we have to pay a marriage tax,” said a farmer from Anhui province.

Rural China is also facing a massive food shortage and the Chinese Communist Party ran a “clean plate campaign” to curb the problem of leftovers and to ensure that everyone gets meals two times a day.

Rural China had always been dependent on grains for their food. But in 1958, the People’s Republic of China’s founding father Mao Zedong had issued a strange diktat asking the people of his country to kill all of China’s sparrows. The move backfired as Chinese agriculture was hit by uncontrollable insect infestations. Famines and starvation had followed in China in which over 50 million died, and the CCP regime started encouraging the people of China to somehow survive by eating anything that moves.

Xi Jinping’s atrocities on the rural population have gotten him very close to being China’s next Mao Zedong, but, in all the wrong ways. Flooding of villages and security disputes with agricultural import sources like Australia and the US are pushing China into a crippling food crisis.

China’s latest farm woes prove how Communism can plunge any nation into a crisis from the oil-rich Venezuela to an export giant like China. The Communist Party is now trying to address these issues through ‘clean plate’ campaign and rural land reforms but the gap between the rural population and the coastal population is too wide to be filled easily.