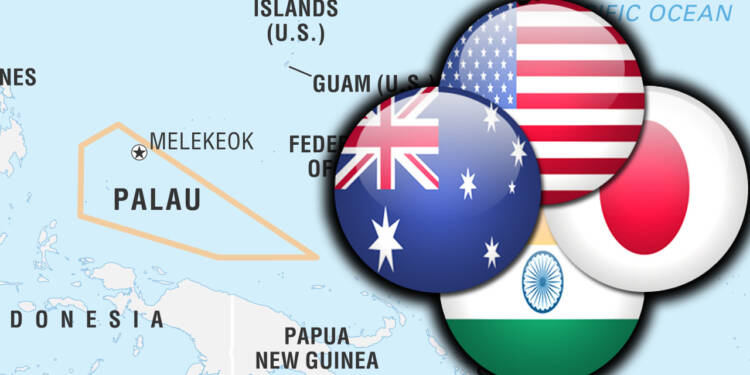 Since the second ministerial meeting of the four Quad countries, the pace at which they are manoeuvring in the geo-strategic and geo-political realm is a modern miracle of International Relations. Now to counter the Chinese influence in the region around Micronesia, Japan, the U.S. and Australia will finance the connection of a submarine internet cable to the Pacific island nation of Palau.

The Island nation of Palau is one of the fifteen countries that recognise Taiwan and enjoys deep ties with the USA and all of its allies, with Taiwan been the nearest benefactor. The latest project of bringing the submarine internet cable to the small Island nation may very well be part of a larger programme. The location of the Islands nation is highly strategic and located in the middle of a region of Chinese influence.

These Islands are seen as critical in the contest with militarily assertive China. The move by the three nations to jointly undertake the project can be a prelude to the development of a QUAD headquarters post formalisation of the organisation comprising of India, Australia, Japan and the USA. The Palau shares maritime boundaries with international waters to the north, Micronesia to the east, Indonesia to the south, and the Philippines to the west. And its peculiar positioning in the south-west of Philipines makes it a good launchpad for any operations in the East & South China Seas as well as anywhere in the South East Asian region.

This action by the three of the four Quad countries has sent shivers down Xi Jinping’s spine. China has invested a huge sum of money to increase and solidify its influence at this end of South East Asia. The most recent example of Chinese investment in the region was the projects in the Republic of Kiribati. However, this investment and the obvious after projects will dismantle all the influence that Beijing was able to garner.

Palau had linked itself earlier to the 15,000 Kilometer long South East Asia-United States (SEA-US) undersea fibre optic cable in December 2017. As per the diplomat report, Trans-Pacific Networks (TPN), a Nevada based company will undertake another fibre optic cable project connecting South East Asia and the continental USA as part of the US push against Chinese Belt & Road Infrastructure projects. The new Palau fibre optics cable will be linked to the above-mentioned TPN project, and it will be a joint venture of the USA, Australia and Japan.

This project will further consolidate the Island nation into the fold of Quad countries and with the country going into elections will have a significant impact on keeping Chinese influence at bay. The Island is also important because it is one of the few nations that recognise Taiwan and for the Quad countries having like-minded countries in the near vicinity of Taiwan is of utmost importance in the face of increasing Chinese muscle-flexing on Taiwan.

The Island nations’ geostrategic importance is very high and as the project counters the increasing Chinese influence while providing a prospective base of operations for the Quad countries in the future is a win-win situation. The Chinese have been facing reversals in the second half of 2020 for their belligerent and bully-like attitude. This project has sent all the right signals to Xi Jinping, and the very fact that it can turn out to be the base of operations for the Quad countries must be the worst-case scenario for Beijing. The mere thought of all the four Navies of India, USA, Australia and Japan operating from a common base at the Islands of Palau must be the end of Chinese expansionist dreams.