You scratch my back, I'll scratch yours 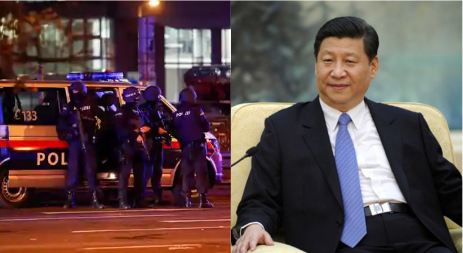 Europe has been swept by a wave of Islamist terror attacks. What started with the beheading of a French teacher, Samuel Patty has now taken shape of multiple terror attacks in European cities like Nice and Vienna. While the so-called leaders of the Islamist world, including former Malaysian Prime Minister Mahathir Mohamad and Turkish President Recep Tayyip Erdoğan have sought to defend such terror attacks, France and Europe are getting support and backing from other countries like India and the US.

However, the only big power that has sought to maintain a low-profile in face of the recent terror attacks in Europe is China. Beijing remains silent because of its own compulsions. China has been tormenting Uighur Muslims in Xinjiang and till now, it has been able to buy the silence of the global Islamic leadership. And now, the paper dragon feels that if it speaks too much about terror attacks in Europe, then Uighur camps might suddenly become a burning issue.

In fact, these countries have gone as far as playing accomplice to China in the latter’s campaign against Uighur Muslims. They have been catching Uighur Muslims and dispatching them back to the People’s Republic of China. Clearly, the temptation associated with helping China on the Uighur Muslims issue has been so lucrative that most fundamentalist of leaders like Erdoğan and Mahathir fell for it.

Today, when Islamist terror attacks are ravaging France and Europe, leaders like Imran Khan and Erdoğan are the ones facing the heat. Erdoğan’s nasty remarks about Macron or Mahathir’s open threat to millions of French people have clearly put the spotlight on the leadership of Muslim nations like Turkey.

The most important takeaway is that Islamist countries that were silent when China was establishing an organ transplant industry in Xinjiang, razing Mosques, running concentration camps, virtually raping Uighur women and forcing them to go through abortions, are now speaking up against countries like France for cracking down on Islamist terror.

At a certain level, firebrand leaders like Erdoğan are even being seen as the ones abetting and supporting terror attacks in Europe. So, while leaders like Erdoğan tried to help China get away with the Uighurs human rights abuse, Beijing is now trying to help Islamist nations go scot-free for making some of the most insensitive remarks about the recent attacks in Europe.

Within China, the clear battle-lines being drawn between the Western world and the political Islamist ideology led by Erdoğan, are seen with a Uighur angle. For Beijing, remaining quiet on the latest terror attacks in Europe is the easiest way to keep the Uighur human rights abuses away from the limelight in the Islamic world.

China clearly wants the ongoing moment to pass. There must be a certain level of diplomatic pressure building up on China to speak harshly about the multiple terror attacks in Europe. But China feels that any harsh remark could easily snowball into an acrimonious diplomatic face-off about Uighur Muslims and whenever anything related to Uighur Muslims comes up, China starts feeling desperate.

Even recently, Turkey had issued a statement about Uighur Muslims, which was an aberration given Ankara’s general indifference towards the plight of Uighur Muslims. Within Beijing, it must have been understood that while a debt-ridden Pakistan will never have the option of even talking about Uighurs, other Islamist nations can use the issue against China, in case the paper dragon tries to speak up about Islamist terror strikes.

France is not just talking. It is also identifying and eliminating Islamist terrorists