CCP is no one's friend 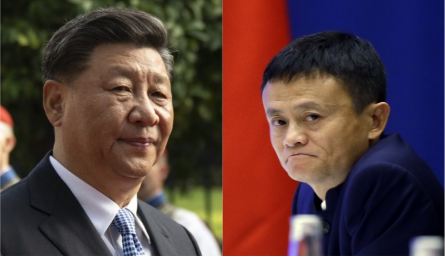 The CCP seems to be turning more and more vindictive. And now even Jack Ma, the founder of e-commerce giant Alibaba, seems to have become a victim of CCP’s vindictiveness. Ma, who once used to be among the most favoured businessmen of the CCP, is now being punished by the same party. In fact, China has reportedly halted Jack Ma-led Ant Group Co.’s $35 billion sale in Shanghai and Hong Kong, in a bid to settle scores with Jack Ma.

The bid to halt Ant’s IPO comes as quite a shock given that Ma is himself a loyal CCP member, who has promised to happily hand over all his businesses to the party if it so desires. But now, Ma is being made to pay for speaking up against the CCP publicly. Ma was irritated about China’s financial regulation and wanted Ant to be treated as a technology company, as against a well-regulated financial institution. But the billionaire made a huge blunder by openly expressing his opinion.

At a public event last month, Jack Ma went as far as calling China’s financial regulation outdated and badly suited for upcoming fintech solution companies like Ant Group Co. According to Reuters, a person with knowledge of the matter said that Ant believes that public criticism by Ma led to him drawing the ire of regulators.

As per Reuters, sources say that on Monday, there was a meeting between Jack Ma and China’s financial regulators, during which Ma and his top executives were told that Ant Group Co.’s online lending business will face greater scrutiny.

It was after this meeting that the Shanghai Stock Exchange gave a major shock to Jack Ma and announced that it had suspended the fintech solutions company’s IPO on its STAR market, also prompting Ant to freeze the Hong Kong leg of its dual listing that was supposed to take place on Thursday.

The Shanghai Stock Exchange itself has described Ant’s meeting with financial regulators as a “major event” and has also claimed that the showdown along with tougher regulatory environment has disqualified Ant from listing.

Within China, the latest move to shatter Ant’s IPO is being seen as a harsh message to Jack Ma. Francis Lun, CEO of GEO Securities said, “The Communist Party has shown the tycoons who’s boss. Jack Ma might be the richest man in the world but that doesn’t mean a thing. This has gone from the deal of the century to the shock of the century.”

The CCP has managed to inflict heavy losses upon Alibaba with its latest move to derail Ant’s ambitious IPO. The Jack Ma-led Alibaba Group owns around one-third of Ant, and therefore it doesn’t come as a surprise that Alibaba fell by 9 per cent in American trading and $76 billion of its value too got wiped off. Alibaba has lost more than double the amount that Ant was looking to raise from its IPO.

However, this is hardly the first time that the CCP has gone after someone who was once seen as loyal to the Communist party. Take for example, Jackie Chan, who supported the Hong Kong National Security Law, and yet got his mansion seized by the Chinese Communist Party (CCP). Jack Ma is now being victimised in a similar manner, even though he used to be CCP’s favourite businessman not very long ago.

The message coming from China is loud and clear- the CCP doesn’t consider anyone a friend. Even if someone like Jack Ma makes any remarks that tend to be a little critical of the CCP, the party will retaliate with all its might. Jack Ma’s remarks about Chinese financial regulation are therefore going to cost him in billions now.