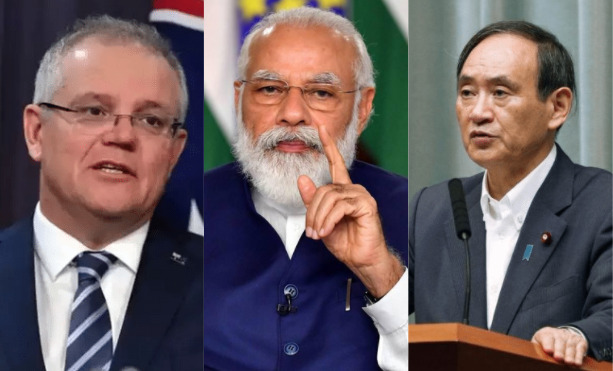 India-Japan-Australia trilateral is fast becoming the de-facto driver of the contain China forces in the attempt to keep free and open lines of trade & commerce in the Indo-Pacific. In September, the Ministers of Trade & Commerce from India, Japan and Australia met in what came to be known as the trilateral to achieve supply-chain resilience in the Indo-Pacific region.

The understanding has now reached to a point where the trilateral is planning to expand the Supply-chain diversification initiative to a larger group of ‘like-minded’ countries. As per the Financial Express report, ASEAN countries could be the most obvious candidates to reach out to, if the trilateral is looking for some decisive push towards sustained diversification.

The three-nation driven Supply Chain Resilience Initiative (SCRI) has planned to set up institutions, industrial parks as a solution to resolve the trade and investment barriers, streamline risk management system, improve sea and air connectivity. The framework would include digitisation of trade documents, exchanging of regulatory information, improving transparency as well as making it easier for businesses to flourish in the trilateral bubble which can be expanded further.

The three nations are on the path to create a track 1.5 dialogue which will involve voices outside governments and from the industries and academia to bolster the trilateral ties.

The Indian government, as per its own initiative, has been pushing the concept of diversification of supply chains. India, during its bilateral summits with their Italian and Dutch counterparts, has already proposed to expand the Supply Chain Resilience Initiative (SCRI) to include other like-minded countries, be it in Europe or Indo-Pacific.

As per reports, India is keen on expanding the initiative to include other countries with converging interests. India is proposing the addition of ASEAN and is in conversation with European Union countries to be part of the conversation on Supply Chain Resilience Initiative. The SCRI is a politically correct term for diversifying manufacturing and supply chains away from China so that Beijing cannot use its monopoly to bully other countries.

The proposal is significant as India is not part of the RCEP (Regional Comprehensive Economic Partnership) which is a larger trade partnership which includes Beijing and thus, works in consolidating supply chains in China. The SCRI can become a larger face of economic containment of China which will work parallelly with the political and geostrategic containment led by Quad.

Read more: Preparing for a world without Trump, India’s ASEAN outreach intensifies to take on China

The India-Japan-Australia trilateral has identified a dozen sectors where the supply chains can be shifted away from China in a swift & clean manner. The sectors include energy, automobiles, steel, pharma, textiles and garments, marine products, financial services, IT services, tourism and skill development.

As the ambit of this trilateral will be increased and these sectors are shifted away from China into a bigger bubble of Trade partnership among like-minded countries, the adverse effect of the signing of RCEP in Indo-Pacific can be minimized and a significant opposite block to counter Chinese bullying and belligerence can be up and working.

The political containment of China through geopolitical manoeuvring of the Quad with like-minded countries will lead to the need for economic independence and diversification from China-centric and China-driven supply chains. It is because, as the countries will put pressure on Beijing to act within the confines of rule-based world order and respect multi-polarity, it will try to bully the vulnerable countries by flaunting every WTO norm. In such scenarios, it will become imperative for the trilateral to create a mechanism which can provide an alternative for the ‘like-minded’ countries to counter any attempt of bullying by China.

The latest example is of Australia, where China has not shied away from outright blockade of imports from Australia, just because it wants to teach lessons to Canberra for its political choices.

India-Australia-Japan is aware of the fact that this can happen with anyone and most probably at their most vulnerable times. So, as the supply chain battle intensifies, the trilateral is looking to expand its ambit and include more like-minded countries to counter belligerent China and create diversified supply chains to make sure a sustainable architecture remains in place which is not influenced by Chinese political adventurism.