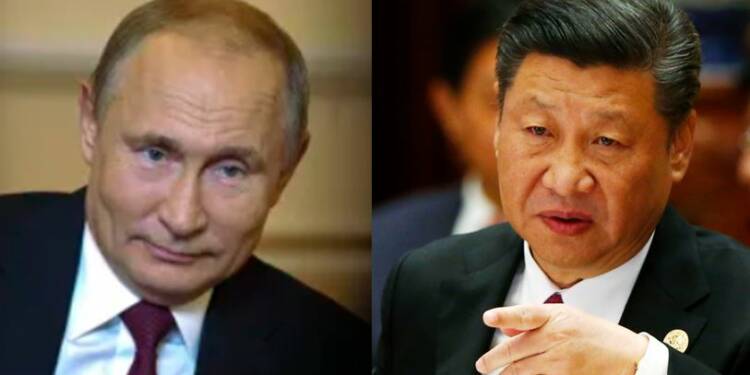 With the apparent Biden victory in the American Presidential polls, the People’s Republic of China is downplaying the American threat. The paper Dragon is therefore waking up to a new threat- the ‘Vladimir Putin’ threat.

China calls Russia an ally and close military partner. Russia too calls China a partner at public platforms. China and Russia share what is being called a “strategic axis of convenience”. But of late, clear faultlines in the so-called Russia-China alliance have started becoming visible over discussions about the prospects of a Russia-China military alliance. And now it seems that Chinese State media is unwillingly acknowledging the Russian threat.

It all started last month, when the Russian President Vladimir Putin gave Beijing a major shock and said that there is no need for a Russia-China military alliance, denying any possibility of any formal military collaboration between Beijing and Moscow.

Putin’s remarks were succinct. But Carnegie Moscow Centre Director, Dmitry Trenin, was quoted by Itar Tass as saying, “Russia does not need to strike a formal military alliance with China against the United States now. Such union would tie the hands of both parties and would scare the neighbours, India in particular, who would be forced to abandon partnership with Russia and cooperate closely with the US.”

This was probably the first time in recent past that the Russian President openly snubbed China, and Russian analysts became somewhat dismissive of Beijing due to the close ties between Moscow and New Delhi. Within Chinese strategic circles, Putin’s remarks denying a Sino-Russian military alliance have come as quite a shock.

In fact, even the Chinese propaganda machinery and loudmouthed State-run media hasn’t been able to decide on how to react to the jolt that Beijing has received from Moscow. Nonetheless, Global Times, a Chinese Communist Party (CCP) mouthpiece, was as always the first one to write a detailed story about Putin’s remarks.

So, CGTN, another Chinese State media house, roped in Djoomart Otorbaev, former Prime Minister of Kyrgyzstan, for an op-ed on Sino-Russian military alliance. Otorbaev said, “I believe that the formation of a military-political bloc between China and Russia seems unlikely.”

But the op-ed again seems to push the narrative that China doesn’t want a military alliance either. The former Kyrgyz PM said, “A military alliance with Russia, although it would noticeably strengthen China’s position, will sharply reduce Beijing’s prospects for at least something to agree with Washington, no matter who enters the White House.”

There is palpable panic in Chinese strategic circles over how Russia seems to be actively abandoning Beijing at a time when the paper Dragon is engaged in multiple conflicts. But the Middle Kingdom doesn’t want to show that it is growing fearful of Russia and therefore it is constantly playing down Putin’s recent remarks.

Russia is clearly trying to draw a safe distance from China. Within Beijing, there must be a definite realisation that even though Russia and China share a so-called axis, much of Russian military deployment is directed along the China border, and not the NATO border. For Putin, an assertive and belligerent China is a threat especially in the context of recent tensions over the paper Dragon’s attempts to claim Vladivostok, a Russian Far East city, as a part of its territory.

If the Kremlin perceives China as a threat, then Russia itself becomes a very dangerous neighbour for Beijing. China is waking up to the ‘Vladimir Putin’ threat, though it might not agree in so many words.