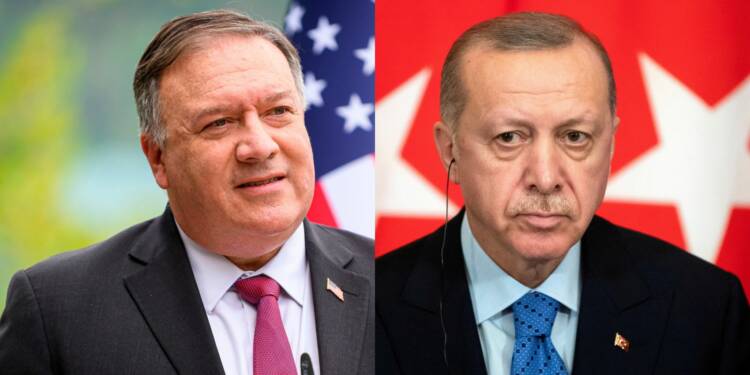 If Turkish President Reccep Tayyip Erdogan thought that he could get away by insulting centuries-old Eastern Roman culture and converting the Hagia Sophia into a Mosque, then he was certainly mistaken. The US Secretary of State Mike Pompeo has made up his mind to punish Turkey and now he is likely to make Ankara pay for its misadventures.

With the US Presidential Elections getting mired in voter fraud allegations, top American diplomat, Pompeo has continued to shape the US foreign policy. He is currently on a major, seven-nation tour to address some of the contemporary foreign policy issues. Meanwhile, Pompeo’s tour has reached a unique phase even as the US Secretary of State visited Istanbul as a part of his ongoing tour.

Pompeo’s Turkey visit is quite different. He had no scheduled meetings with Turkish officials. Whom did the US Secretary of State meet then?  Bartholomew I of Constantinople, the spiritual leader of the Greek Orthodox world. This carries a lot of symbolic significance. The fact remains that of all the Hagia Sophia Churches, or Church-turned-museums, converted into mosques by Erdogan, the Hagia Sophia in Constantinople was the most important. It used to be the main seat of the Greek Orthodox Church.

By meeting Bartholomew I of Constantinople and ignoring Turkish officials, Pompeo is suggesting that the White House supports the Greek orthodox world and not Ankara.

Pompeo’s Istanbul visit has actually needed the Erdoğan administration. Before his visit, the US State Department had said that following France, “Secretary Pompeo will travel to Istanbul, Turkey to meet with His All Holiness the Ecumenical Patriarch of Constantinople, Bartholomew I, to discuss religious issues in Turkey and the region and to promote our strong stance on religious freedom around the world.”

In its response, Turkish Foreign Ministry spokesperson Hami Aksoy had said, “The language employed in the press statement regarding the State Secretary’s visit is completely irrelevant.” Hami had added, “It would be more suitable for the U.S. to first look in the mirror and show the requisite sensitivity towards human rights violations in the country such as racism, Islamophobia and hate crimes.”

The war of words between Ankara and Washington in the run-up to Pompeo’s Istanbul visit is taking the shape of fresh US-Turkey tensions after the top American diplomat’s visit to the Eastern Mediterranean nation.

In fact, Pompeo’s blitzkrieg in Turkey over the Hagia Sophia issue is paving the way for an alliance of Catholic-dominated countries against Turkey. Pompeo himself spoke of France and told Le Figaro, a French daily, “President Macron and I spent a lot of time discussing Turkey’s recent actions and we agreed they are very aggressive.”

Pompeo cited Turkey’s aggressive actions in Azerbaijan, Libya and the Eastern Mediterranean, while launching a blistering assault on Ankara’s unsavoury belligerence. Pompeo added, “Europe and the United States must work together to convince Erdogan such actions are not in the interest of his people.”

The US Secretary of State is clearly making a huge issue out of Ankara’s bid to insult the Catholic culture, in general, and the Greek orthodox culture, in particular. And from his Istanbul visit, it seems that Pompeo has decided to make Erdoğan pay for his Hagia Sophia misadventure.