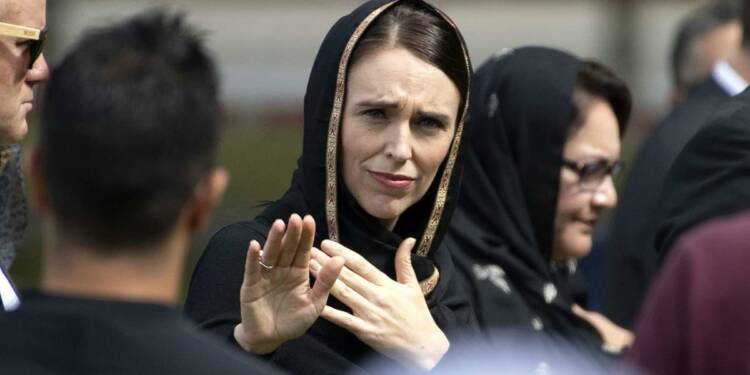 The pseudo-liberal leader of New Zealand, who had earlier catered to the Islamist-fundamentalists by sporting a Hijab, has come again with a new way to appease the extremist fringe in the followers of Islam. The New Zealand police have decided to include Hijab in their uniform so that no one has to compromise their religion and values. Historically multicultural states like India know how these kinds of measures backfire, countries like New Zealand who have recently experienced multiculturalism remain too utopian to understand what is bad for their country.

It is often the case that too much peace and stability makes societies oblivious about how privileged they are to be a part of it. By becoming a victim of their own privilege, they elect leaders like Jacinda Ardern, who lead their countries straight into a bottomless abyss of hell. While she has earlier proven her pro-China and pro-communism tilt, this time she has also confirmed her pro-Islamist stances. As per the latest policy decision, women from the Muslim community who wish to wear Hijab with their police uniform will now be allowed to do so. It is sure to open a pandora’s box of unintended yet highly potent unending steps of appeasement.

Her actions seem strikingly similar to those of Angela Merkel of Germany when she had started appeasing its Muslim minority by pandering to the Islamist fringe and making such concessions. Markel’s leadership of the European Union and her support to the sections of other European countries to act similarly is the reason why Europe is suffering from the menace of Islamists, fundamentalists and terrorists. It was followed by opening the European floodgates for waves of immigrants who were not in sync with the socio-cultural developmental level of Europe. This pandering and actions based on utopian-pseudo secularism had led to the creation of parallel socio-cultural setups, basically, mini-states inside the sovereign European Nation-States.

While actions of Angela Merkel could be managed with some pain, given the vastness of Europe and its socio-economic strengths, New Zealand is nowhere near capable to sustain itself if Jacinda follows the exact footsteps of Angela Merkel. The decision of allowing people to wear Hijab as part of Police uniform makes her pro-Islamist tilt evident. The measures to pander to the Islamists and fundamentalists will only increase as the parallel society controlled by this fringe becomes a juicy vote bank for the communist- Islamist apologist leader of New Zealand.

The scariest part is that it will culminate in the similar decisions that Europe took, like relaxing immigration policies and accepting large waves of immigrants. Given the existing minuscule population, these policies will change the demography of New Zealand extremely fast and the country will be faced with a worse fate than what Europe is dealing with right now.

Earlier too, Jacinda has displayed her indecisiveness by not supporting all-weather allies like the five sea alliance, in condemning China. This time too it seems she has not learned lessons from what is happening in Europe and around the world or else, she is not at all concerned with all this and does whatever it takes to keep herself in power. Whatever may be the case, she has time and again shown her pro-China and pro-Islamist tilt, and she displays the qualities which are perfect to lead a country to failure. She is distancing her small and vulnerable country away from allies, and into the lap of China, making New Zealand economically vulnerable. Now, in addition to that, by pandering to Islamists, she is making the country socially vulnerable and divided.

She has already opened the pandora box by allowing Hijab in the police. This action will be followed by many other appeasement policies which may end up in allowing too many migrants from extremists and fundamentalist regions of North Africa and the Middle East. All this makes the future of New Zealand under the leadership of Jacinda look grim.