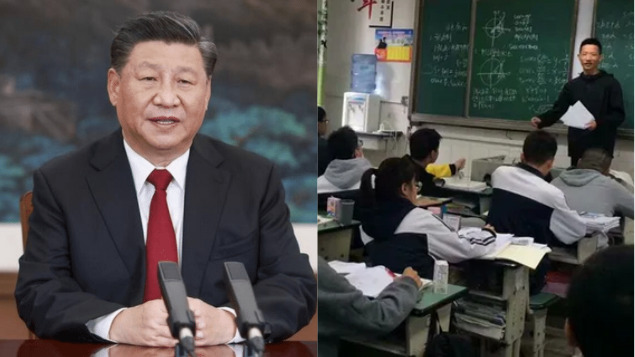 The Orwellian concepts from his famous work, 1984, are fitting perfectly in 2020 China, and anyone who has read the book knows that it is not a good sign. Just like the government and Ministry of Love in the book, Beijing is arresting people for having opinions and sending them to re-education camps and prisons. Although China has a past of putting people in prison, one example being the cultural revolution, since the time of Deng Xiaoping, China eased a little bit. However, recently as per multiple reports, Beijing has gone back to its earlier practices. China has been increasingly dismissing, firing, even arresting and sentencing to prison terms after being turned in to authorities by classroom informants for “inappropriate speech.”

The term “inappropriate speech” is as vague as the reason needed by the Communist Party to arrest the educators. The Chinese government has been influenced by both legalism and Confucianism in their approach to statecraft. And the legalism aspect decrees of placing informants and spies to be the eyes and ears of the government. The Communist regime in Beijing seems to be feeling really vulnerable, to have been frequently jailing the professors from just tip-offs from informants in the guise of students.

It will not be helpful for China as they will remain a reverse-engineering, technology thieves if the curbs on freedom of speech and policing of thought are maintained. They will only be able to dish out tamed humans who say the same thing and do what is asked to them, not innovate. Recently, renowned historian, Shen Zhihua, an expert on Cold War was in the process of delivering a speech at an academic seminar on the rise and fall of the Soviet Union, which was being live-streamed but just an hour later, the feed suddenly went off. Although it is not clear what the historian may have uttered that was offensive. The Capitol Normal University in Beijing, which hosted the seminar has yet to put the video back online.

The University later released a statement where it blamed a malicious tip-off from students or individuals who gossip on teachers when they make statements that can be perceived not in line with the Communist Party’s official narratives. However, the point that the tip-off was malicious means that Shen may not have said anything off, but the students may have informed the authorities with malafide intent. And that is the type of monster China has unleashed on its citizenry.

In the past as well, Legalism lost out because it was supportive of informants, and when the tip-offs became a way to settle personal scores, no one was able to ascertain who was right and who was wrong, thus the whole society went berzerk and the Chinese kings moved away from this practice. Now, around two thousand years later, CCP is making the same mistake, and the result will certainly be ugly.

However, the university showed its spine by calling the complaint a clear violation of the idea of academic deliberation as well as freedom of speech. The university clearly mentioned that it was certainly not a subversive speech and the talk was to carry out the spirit of President Xi Jinping’s recent speech on the study of the “Four Histories.”

Yu Shengdong is another victim of the above-mentioned practice and says that malicious tip-offs are prevalent in many universities throughout China. He said it will turn universities into party strongholds what will be reminiscent to the Mao Zedong era. He told VOA that everyone is feeling the danger and the chilling effect in Chinese universities.

This looks really similar to the days of the cultural revolution when slightest of difference or even the perception of difference could lead to the intellectuals and professors to be sent to re-education camps. The signals are obvious and as the country becomes more and more vulnerable, these things may increase. Xi Jinping wants to be the next Mao and by the looks of it, he will sacrifice too many Chinese people in pursuit of it.