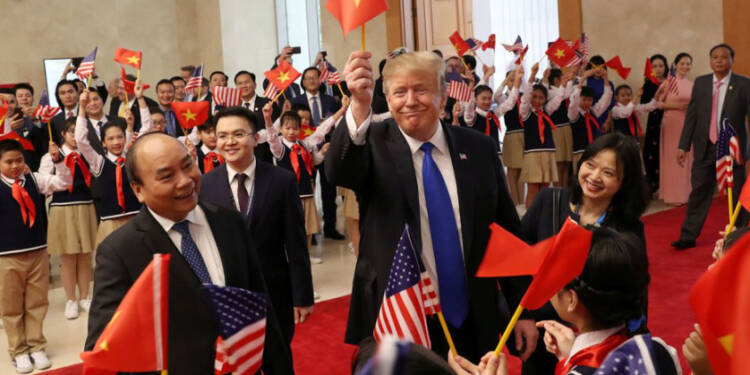 The US foreign policy has been concretised and has focused quite heavily on the containment of Chinese imperial designs, by curbing its ability for geostrategic manoeuvrability and economic viability. The quad members are actively working with major ASEAN countries. In line with it, the US National Security Adviser Robert O’Brien has told the Vietnamese leadership, that they must curb illegal re-routing of Chinese exports and purchase more US goods such as liquefied natural gas and military equipment to avoid American tariffs. This can be seen as part of USA’s relentless campaign of containing belligerent China economically.

Recently, the United States had imposed tariffs on Vietnamese imports, citing the undervaluation of its currency as a reason among others. It was in this regard, that O’Brien said the cracking down on Chinese trans-shipments and easing the USA’s trade deficit with Vietnam could be the basis of reversals, during his recent visit to Vietnam. It was during this visit that he met the Prime Minister Nguyen Xuan Phuc and Foreign Affairs Minister Pham Binh Minh. There he provided a solution to reduce the deficit of trade, by buying US military helicopters, but for this, Vietnam needs to take concrete measures against the illegal dumping routes. The Trump Administration is trying to deny China any alternate routes to dump its manufactured goods so that it gets hurts hard by the US sanctions and could not find any alternative and innovative solutions to the sanctions.

Although the Vietnamese have shied away from making public statements regarding their grievances against the Chinese, they remain really concerned with Beijing’s ever-increasing belligerence and aggressive attitude regarding the South China Sea in particular and its neighbourhood in general. This is because Chinese actions have made it difficult for the Vietnamese to make use of resources present in its Exclusive Economic Zone, be it, fisheries, LNG or oil drilling.

Hanoi has for long maintained a foreign policy action plan, where, it maintains cordial relations with China regarding economic relations and vehemently opposes its adventurism in the South China Sea and its efforts to encroach on other country’s sovereignty. However, as the aggressive attitude of China increases, it is becoming more and more difficult to maintain the dynamics.

It would be really interesting to see, how Vietnam manages to contain China’s illegal dumping of its exports, as it is difficult to even curb the influx of economically vulnerable Chinese population from its northern borders. Hanoi will have to work overtime to make the necessary arrangments to contain the illegal entry of both goods and people from China.

Read more: Hungry and poor Chinese have been flocking to Vietnam and now China is building a wall to save itself the embarrassment.

Vietnam has profited the most in this pandemic among all the ASEAN countries, as the manufacturing shifting from China has largely gone to Vietnam and if these illegal produces and workers are not curbed, then it is concerning for Vietnam too. Thus, the US concerns and suggestions are in line with what Vietnam would want to do itself. And in this regard, a good future can be predicted regarding US-Vietnam relations.

Read more: To turn the tables against China, the Quad’s primary focus is on Vietnam and the Philippines.

Now, with the quad countries, giving high precedence to the relationship with ASEAN countries like Vietnam and the Philippines, these countries are gaining confidence to take a more resolute stand to the Chinese. The visit by US National Security Advisor is a testament of US and quad’s commitment to the ASEAN centrality and as these countries respond to their concerns concerning China, they will find themselves closer to the Quad countries. As this happens, the economic containment of China would be all the more successful. In the meantime, the USA is observing Chinese activities in real-time and as soon as they find Beijing trying to circumvent the trade sanctions, it moves with godspeed to thwart Chinese plans.