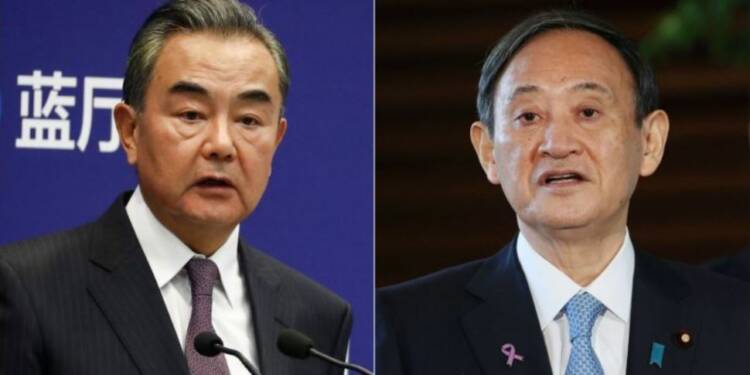 Xi Jinping’s international embarrassment- Chinese Foreign Minister Wang Yi, has got Beijing humiliated all over again. After a catastrophic Europe visit and an unforgettable five-nation tour in Southeast Asia comprising Cambodia, Malaysia, Laos, Singapore and Thailand, Yi has now faced a major embarrassment in another part of the world- Japan.

Chinese Foreign Minister, Wang Yi visited Tokyo on Tuesday. The Chinese Foreign Minister had high expectations from this visit. He wanted to fix a state visit to Japan for the Chinese President Xi Jinping. The Chinese President has been trying to visit Japan for the past several months. But he has failed to get an invitation from Japan. However, Wang Yi was mercilessly confronted by his Japanese counterpart during a press conference on Tuesday.

During a joint news conference following their meeting on Tuesday, the Japanese Foreign Minister Motegi Toshimitsu humiliated Wang Yi publicly. Motegi raised the uncomfortable issue of the Senkaku Islands. Motegi made it clear that he explained Tokyo’s stance on the said islands in the East China Sea. He further urged China to act on this issue in a constructive manner.

Senkaku Islands are the subject matter of rising Sino-Japanese tensions. Chinese vessels have been hovering around these Japanese islands, and Tokyo has repeatedly objected to such Chinese incursions. Now, by raising the same issue all over again, the Suga administration is making it clear that it is not going to tolerate Chinese belligerence.

Japan has actually used Wang Yi’s visit to send a loud and clear message to Beijing- stay away from the Senkaku Islands. Chief Cabinet Secretary Katsunobu Kato, who also met Wang Yi, told reporters, “The situation is extremely serious.” Kato added, “I conveyed (to Wang) our concerns about the activities of the Chinese government ships around the islands and asked for positive steps by China.”

Kato also said that the Japanese government protested earlier on Wednesday, when Chinese vessels entered Japan’s contiguous zone close to its territorial waters for the 306th time this year. Even more shockingly, Kato said that he raised concerns over the situation in Hong Kong, where China has gone out of its way to interfere in the city’s internal matters and rob it of its basic freedoms.

Wang Yi probably also wanted to expand cooperation with Tokyo, and somehow realise Xi Jinping’s wish to make China a member of the Tokyo-led Comprehensive and Progressive Trans-Pacific Partnership Agreement (CPTPP). However, Japan was in no mood to discuss cooperation. The only highlight of Wang Yi’s visit is therefore the Senkaku Islands.

The Chinese Foreign Minister himself was clearly clueless and unprepared to face Tokyo’s diplomatic offensive over the Senkaku Islands issue. All that he could manage was unimpressive Chinese propaganda. The Chinese Foreign Minister said, “We will of course keep protecting our country’s sovereignty.” He added, “Through the joint effort by both sides, we would like to make the East China Sea the sea of peace, friendship and cooperation.”

Wang Yi can talk about ‘sea of peace’, even though Chinese ships keep intruding into Japanese waters. However, the fact remains that he was not expecting diplomatic hostility on his Japan visit. His purpose was to fix a meeting between Xi Jinping and Japanese PM Yoshihide Suga, and somehow pave way for Sino-Japanese cooperation. However, he clearly failed at his job and that too in a terrible manner. Xi Jinping has thus been embarrassed once again internationally.