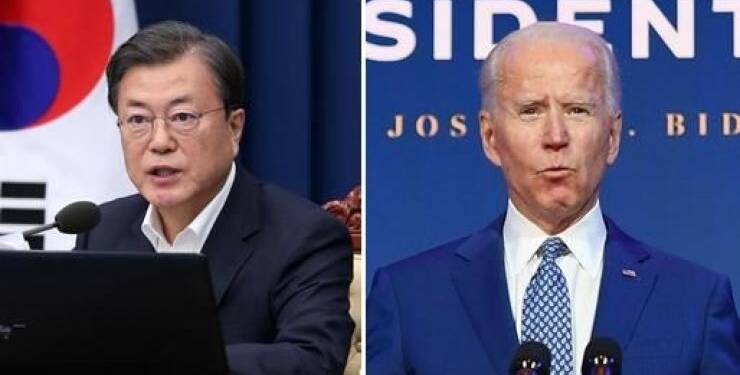 The possibility of a Biden led democrat administration has brought many countries to redraw their foreign policy understandings and initiatives for the next decade and after that. One of the countries which has kept its cards closed until recently has been South Korea. However, even then it has clearly signalled that it will not accept anything less from Biden than staying on the track with Trump’s policy vis-a-vis North Korea. Now, with the earlier reluctant countries too wishing Joe Biden, South Korean President Moon Jae-in’s adviser calls South Korea to break-away from the framework of China-USA and become a part of and influence the creation of an independent economic & security framework.

The Special Foreign Policy and Security adviser, Moon Chung-in made remarks in the same regards during a virtual seminar. He said that a new framework should be developed together with Australia, Canada and Japan to address regional economic and security issues, and not be caught in the tug of war between the Chinese and the Americans.

As per news reports, he stated in the seminar, “The Biden administration will be using a softer tone, but the policy will be as tough as Trump’s. There will be a tougher American encirclement of China, although he might be more selective in terms of technology and economy.” He also said that the situation among the two world powers will only deteriorate, and the world cannot return to the era of block politics, where the interests and aims were defined which block one was part of.

This has come after the South Korean warning to the USA to keep its foreign policy regarding the Korean peninsula and North Korea, consistent and similar to what it is under the Trump administration.

Read more:  South Korea’s warnings are clear: Biden’s North Korea policy can easily turn into a disaster if Trump’s legacy is not followed.

The world is now a realpolitik geopolitical reality, and when the Biden administration comes and starts doing dilly dally with the Chinese, it will give China a dominating position and many winning opportunities. Thus, any policy of betting everything with the USA is not a sane strategy.

He said, “We should play a key role in creating a new order so that we can get out of this bloc diplomacy,” he also called for a “smart” and “principled” diplomacy equipped with intelligence and flexibility, and also one that reflects national interests and public support.

The North Koreans, too, are wary of a possible democrat led US administration, as the old wounds of bilateral relations under President Obama become afresh. The fact that the country has been ordered by their leader to be battle-ready only gives substance to this hypothesis.

Going ahead, a larger consensus of middle powers and great powers is largely becoming that these countries should stick together and create a framework which gives precedence to the multipolarity and their own interests rather than catering to one of the two superpowers. The statements by the assistant to Moon Jae-in has reiterated it.