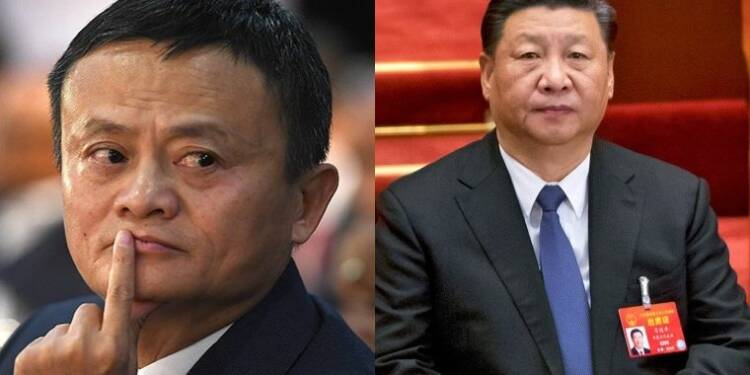 The rise of corporate giants in China is looked upon with disdain by the Chinese Communist Party. After much reforms by the former Chinese President Jiang Zemin, who allowed ‘capitalists’ into the CCP’s fold, present party General Secretary Xi Jinping has now set out on a mission to undo all of his predecessors’ work in strengthening the paper dragon’s private sector. In fact, if latest developments are anything to go by, Xi Jinping is well headed on the path of destroying the country’s private sector only due to fears of ‘capitalists’ gaining autonomy and falling out of the country’s tight regulatory systems.

Jack Ma, founder of e-commerce giant Alibaba Group is currently facing a CCP-inflicted bloodbath, as Xi Jinping makes it a life mission to destroy him for one controversial remark made late last month. In perhaps an unintended attack on China’s regulatory framework, Ma had said that the country’s financial regulation was outdated and badly suited for upcoming fintech solution companies like Ant Group Co. The Alibaba founder’s exact words were: “good innovation is not afraid of regulation, but is afraid of outdated regulation.” Now, fears are abounding that Jack Ma faces a ban from flying out of China and is perhaps being prohibited from public appearances as well.

Read more: Jack Ma has been the most favoured businessman of the CCP but CCP punishes him for just one note of dissent

The founder of Chinese e-commerce powerhouse Alibaba Group did not make an appearance at this year’s World Internet Conference. The annual Chinese government-organized event brings together public officials and high-profile tech executives. Even Ma was a regular attendee of the event in the past. But this time, it was all up to Alibaba Chairman and CEO Daniel Zhang to represent the company, who had no option but to heap praises on China’s draconian industry regulations.

The remarks of Jack Ma would, in a decently sane country, not even mildly qualify as dissent. In China, however, the billionaire’s remarks are now being used as an excuse by a vindictive Xi Jinping-administration to bring the country’s tech sector, and corporate structure at large, to its knees. Xi Jinping is undoing all little progress made by China to accept ‘capitalists’ as bare humans deserving the chance to flourish. The bloodbath inflicted by Jinping on the Alibaba Group will not only be a means of settling scores with Jack Ma but will be a stepping stone for the CCP to once again choke the country’s private sector.

Jinping started his purge against internet giants recently by halting Alibaba founder Jack Ma’s Ant Group Co.’s $35 billion IPO in Shanghai and Hong Kong. If stripping of Alibaba and Ant Group Co. of their large sum of finances was not enough, Beijing also ensured that the Shanghai Stock Exchange gave a major shock to Jack Ma by announcing that it had suspended the fintech solutions company’s IPO on its STAR market. Then, in a petty vindictive campaign, a cryptic column was posted on Xinhua’s official WeChat account after Ma was summoned to a round of questioning by the Chinese authorities.

Here, the catch was Japanese artist Kaii Higashiyama’s popular 1972 painting titled ‘Fleecy Clouds’, which showed a white cloud in the sky shaped like a horse. Jack Ma’s Chinese name, ‘Ma Yun’ literally means ‘Horse and Clouds’. Clearly, the CCP is now hinting that the horse (Jack Ma) could be blown away like a cloud. Such is the disgust which Xi Jinping harbours for China’s private sector. It is Jinping’s insecurity, a false sense of supremacy, an unquenchable ego and communism all wrapped into one which will be the death-knell for China’s private sector.