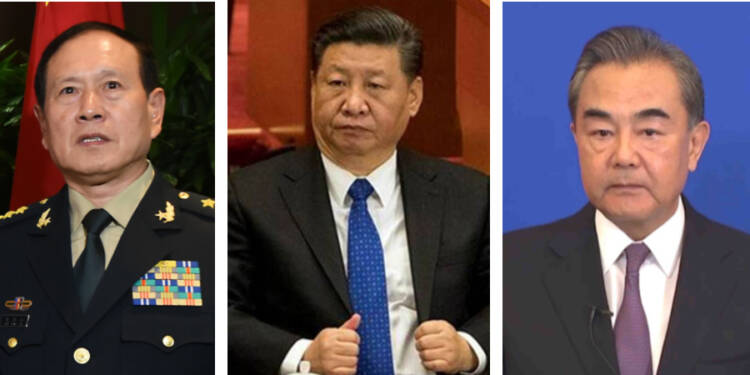 China has been facing international containment and isolation. After a number of Chinese official visits turning into moments of extreme humiliation, the latest addition to this comes from the visit of Chinese Defense Minister to Nepal and its aftermath. After Wang Yi, this time the Defense Minister Wei Fenghe was the one taking all the embarrassment.

China wanted to have a bilateral meet between its Defence Ministers and of Nepal, who happens to be KP Sharma Oli. However, the fact that Wei Fenghe had to suffice with a meeting with Nepal’s Army Chief is a major development in the regional geopolitics. This is one of the many post-COVID pandemic visits which have turned into massive humiliations for China.

Beijing has been trying hard to regain the confidence of its now lost friends and countries which had good relations with it earlier. However, there are no takers for these ill-intended goodwills. The pandemic has shown true colours of the Communist Party of China’s megalomaniac and devious colonial agendas, and the proliferation of debt trap coupled with its wolf warrior diplomacy, China too, has not hidden these agendas. On the contrary, Beijing thought it to be the best opportunity to further its designs. Be it the border clashes with India, confronting Japan in the East China Sea, Taiwan in Taiwan strait, ASEAN countries in the South China Sea, Australia with its trade embargo among others.

The world has turned against China and its earliest signals were visible since the change of hearts of the European Union. The Euro tour by Foreign Minister Wang Yi to mend ties was an absolute disaster, all the countries he visited kept asking about the Human Rights crisis within China. The visit made permanent the divide and brought EU countries closer to Taiwan. It also made sure, China losing its all-weather ally in the EU, that is, Germany as it has also launched its own Indo-Pacific policy.

The ASEAN countries too, have been more cautious of China. The member countries have not agreed with Beijing to formulate a code of conduct and wants the involvement of other countries so that ASEAN is not cornered into a one-sided deal. South-East Asian countries have been working together with the quad as well as other like-minded countries to counter Chinese influence in the region, which is why the Chinese visits have had no influence there too.

Read more: ASEAN pulls a fast one over China, puts the code-of-conduct in South China Sea in an infinite loop.

Now again, the sheer scale of embarrassment for China, when Nepal denies him permission to meet any elected official and makes him meet Army Chief, while PM Oli met Indian Army Chief. In addition to this, Bangladesh visit has ended before it could even start. The government at Dhaka said that the person of equal standing is suffering from COVID and thus, the meet could not be possible. However, the reasoning is obviously not adding up and means a subtle no. And after these setbacks, the Defense Minister is set to visit the obvious country, that is, Pakistan.

While China was trying to make the region as its Guinea Pig for its vaccines, India has taken the region out of Chinese stranglehold. The embarrassment for China becomes all the more pronounced as India was the one which has shown its prowess.

Read more: China sent its Defence Minister to Nepal and Bangladesh to amend ties, but his tour turned out to be a massive humiliation.

These continued geopolitical failures and embarrassments direct towards an obvious trend, that is the short-lived hype of Chinese foreign policy is dying out. The Coronavirus as per Beijing was going to be an opportunity to further its designs, however, it has brought all the world together against China and for some reason Beijing cannot fathom it.