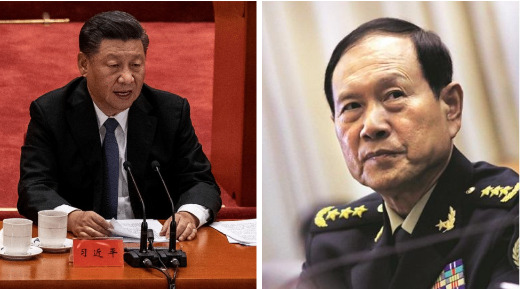 China’s efforts to turn Bangladesh and Nepal against India got flushed down the toilet in no time. Its plans on holding high-level meetings with Nepal and Bangladesh were stalled and the Defense Minister of China made a fool of himself in front of the global community.

When Chinese Defense Minister Wei Fenghe landed in Nepal to meet top leaders and officials, he was given a mere courtesy call by the Nepalese Prime Minister KP Sharma Oli who also holds the Defense portfolio. Along with PM Oli, China had desired a meeting with Deputy PM Pokharel, but, to Chinese disappointment, he too snubbed the Chinese Defense minister. Poor Wei Fenghe in his entire Nepal vacation merely had to settle with meeting just the Nepali Army Chief and two courtesy calls with PM Oli and President Bidya Devi Bhandari. This was a signal to the Chinese top brass that its days of wooing Nepalese top leadership are over.

Read More: India snatches Nepal back from China’s grip in just one month

Beijing’s envoy expected a grand welcome with a high-profile lunch meeting with former Foreign and Defense Ministers of Nepal, planned by the Chinese embassy in Kathmandu, but to their utter disappointment, Nepal gave a clear no. China had also proposed meetings with political parties, former Prime Ministers like Prachanda, Madhav Nepal, and Jhalanath Gautam, and deputy PMs Bamdev Gautam and Narayan Kazi Shreshtha. But amusingly these were also shelved.

When Fenghe in his desperation of a respite from embarrassment in Nepal decided to steer his ship to Dhaka, the results were the same as in Kathmandu. Bangladesh went a step further in making a fool of China and outrightly rejected Fenghe’s visit, it gave the reason that its Foreign Minister, Deputy Foreign Minister, and Foreign Minister were all infected by Chinese origin Coronavirus. Thus, the Chinese envoy had to cancel his Bangladesh tour. This roasting of Wei of Chinese Defense Minister who is also the first-ranked State Councilor in Li Keqiang Cabinet and first-ranked member of XI Jinping chaired Central Military Commission can be simply seen as an open challenge to Chinese Communist Party’s imperialism and Chinese hegemony in general.

Nepal had very painfully realized that any effort to initiate a dispute with India shall be met with severe consequences. It was also a clear warning to China that its mischievous efforts to turn top Nepalese leadership against India would be of no use as Nepali citizens want Indian friendship. Since Nepal is a democracy like India, leaders have to listen to their citizens, which China might not understand. Nepal’s recent cartographic adventures, claiming Indian territories of Kalapani in Uttarakhand brought Nepal only opposition and distrust, both domestic as well as international.

Also, what is seen as a major setback to the Chinese interference in India’s neighbourhood, India on the other hand is sitting back and enjoying as its plan unfolds. India very wisely orchestrated the events which led to the Chinese defence minister’s public meltdown. Indian foreign Secretary Harsh Vardhan Shringla and Army Chief MM Narvane had visited the Himalayan country and assured its leadership of extensive support in dealing with the expansionist China, which has reportedly occupied Nepalese territories like the Rui and Teigha villages in Gorkha district of Nepal. Kathmandu is very keen on rekindling its relations with India which had gone cold because of malicious efforts of China to step outside of its boundaries which it tries to do very often.

After his humorous visit to Nepal and half visit to Bangladesh, Wei Fenghe and the party found solace in China’s ‘iron brother’ or junior partner or colony – Pakistan. Pakistan with its spineless leadership welcomed Wei Fenghe with open arms, with President Arif Alvi and Prime Minister Imran Khan lining up to meet him. As he landed, together with Pakistan’s Army Chief and Gen Qamar Bajwa, he started conspiring hollow plans to harm India’s sovereignty.