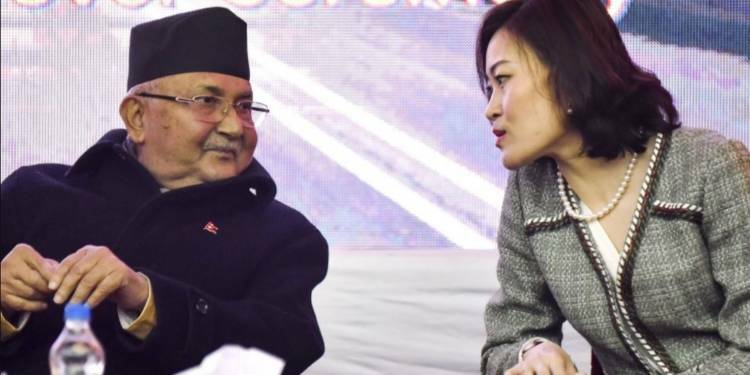 In a tug-of-war between the big powers, it’s often the smaller states who suffer the most. The escalating tension between India and China is no exception to that, and Nepal has emerged as the Shrimp amongst the Whales in the Himalayan region. China has left no stone unturned to gain and maintain control over Nepal to check the Indian resistance to Chinese bullying.

Hou Yanqi – the Chinese Ambassador to Nepal on Tuesday evening met the Nepal Prime Minister KP Sharma Oli amid the reports of a rift in the Nepal Communist Party – the current ruling party. The meeting lasted for two hours and speculations began spreading on the nation continuing to compromise its national interest in the influence of the ‘paper dragon’.

Now, the question arises, “what compelled Nepal to compromise its national interest?”  Why all of a sudden, in 2020, Nepal objected to the Dharchula-Lipulekh road link that is under construction since 2008? Not only this, but they also changed their political map to show a part of Indian Territory belonging to Nepal, and the claim over Ram Janmabhoomi, and the Indian cities of Dehradun and Nainital. But these adventures came at a cost; the cost of becoming a Chinese puppet and dancing to their tunes.

According to The Ministry of Agriculture, China has occupied land in at least 11 places of four Nepali districts. The areas occupied by China are of strategic importance as most of the areas are the catchment areas of rivers. Earlier in June, China quietly occupied Nepal’s Rui village and again in August, the dragon grabbed lands in its seven bordering districts.

Surprisingly, Oli hasn’t uttered a word against these encroachments, and when you dig deep into it, you can understand why. Xi Jinping being the godfather of Nepal has saved their position recently. Just a few months back, the Nepal Communist Party was facing the threat of a split and it was Hou Yanqi again who held a series of meetings with senior Nepal Communist Party leaders to rescue the Nepal PM.

However, all the payments made by Oli to his masters didn’t remain private for long, and sooner this came to light. Oli administration started to face challenges; the people of Nepal started protesting and the Indian government didn’t miss this opportunity to engage with Nepal. There have been several visits to Nepal, by high-level Indian officials including the Foreign Secretary, the RAW Chief, and the Army General.

Now, the political scenario in Nepal has started changing. The pro-India political faction has gained momentum, Nepalese media has turned against China, the scope split in Nepalese Communist Party re-emerged, and the Oli administration’s legitimacy is being questioned. And, if this continues for long none can save the Oli government from falling, not even the Xi Jinping.

India and Nepal have maintained centuries-old relations – a relation of history, heritage, culture, family, and livelihood, frequently knows as the ‘roti-beti’ relations. However, with the rise of Communists to power in Nepal, it has been trying to move out of the Indic influence to appease the only communist giant – the Chinese Communist Party. Nepal has been dancing on Chinese tunes for the last few years and all of sudden they have started behaving like an irrational nation-state who is sacrificing their national interest just to favour another state that is not only a bad deal to their interests but also a threat to their sovereignty.

However, understanding the urgency of the situation – the godfather of Oli has tasked his ambassador Hou Yanqi to rescue his godson once more.  Not because they have an interest in maintaining stability in Nepal but, to fulfil its expansionist dream of acquiring the second left buffer after Tibet between India and China.