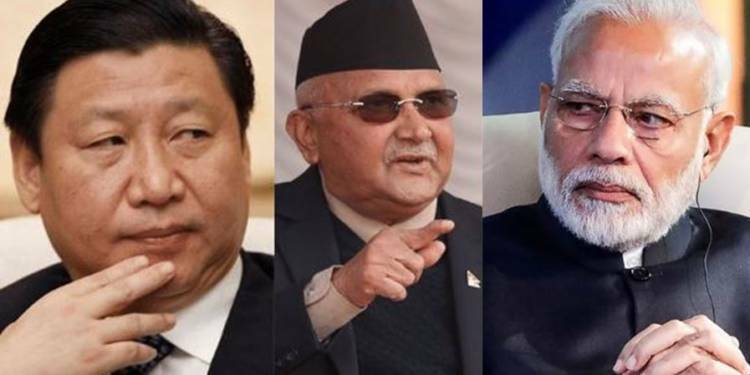 After flirting with Communist China for a while, Nepal has now come back to India to help reduce Kathmandu’s dependence on China. Earlier Nepal invited India’s Army Chief General M.M. Naravane, who will be accepting the title of Honourary Chief of Nepal Army by Bidya Devi Bhandari, President of Nepal during his three-day visit, commencing tomorrow.

As PM K.P Sharma Oli will meet India’s Army Chief in the capacity of Nepal’s Defense Minister, it looks like a step by Kathmandu to cool the heatwaves between India and Nepal. Nepal is most likely looking to reduce its dependence on China by India’s help. As per news reports, Army Chief’s red carpet welcome is an indication that Kathmandu wants to revive the Pancheshwar multi-purpose project on Mahakali river among other hydro-electric projects with India. PM Modi and his administration have shown magnanimity to Nepal in the past too, but Oli government has continued with its flip-flops. Thus, this time around, India will put some conditions which will make sure that Nepal does not destabilize the region for its short term gains.

Nepal, for quite a while, kept China in very high regard and enjoyed the easy money as Chinese investment continued rolling into Nepal. With China backing it, Kathmandu had started taking an anti-India stand and started claiming the Indian territories Limpiyadhura, Lipulekh, and Kalapani. However, while Nepal was busy claiming Indian territories and changing maps with Chinese backing, parts of its territories were being taken over by Beijing. Now, when the Nepalese are facing security issues, they are coming back to India for help to reduce their dependence on China.

The Oli government in Nepal has been taking steps to show its commitment to the Indian government regarding its seriousness for improving India-Nepal ties. In October, PM Oli cleared General Naravane’s visit and removed deputy Prime Minister Ishwar Pokhrel from the position of Defense Minister, a sharp critic of India.

A top government source told Hindustan Times that, if the conversation goes as expected, then India might reciprocate with the resumption of the foreign secretary-level talks and a meeting of the Joint Technical Level Boundary Committee. However, the ball is in India’s court, and the resumption of Foreign Secretary-level talks totally depend on Nepal’s reaction to India’s conditions.

India can possibly make any or all of the following demands. Either Nepal drops its map or at least calms down the rhetoric on the border dispute, Kathmandu will have to make it clear once in for all regarding its relations among India and China. India will no longer allow Nepal to do use India as a balancing weight against China.

Nepal has punched way above its weight, a country or a group of countries can extract the maximum profit and balance two major or great powers only when the country or group of countries are big enough to sustain the balancing act for a long time. However, Nepal is too small, and it does not provide a market big enough for India and China to invest much, thus, if it tries to play the balancing act, it ends up becoming the tool of Chinese aggressive actions against India.

Thus, India is most probably going to explain the same to its Nepalese counterparts and suggest them to ease down on the border claims. In this regard, the 5th November meeting of PM Oli as the Defense Minister with India’s Army chief M.M. Naravane will be very important.