She is revealing her true colours 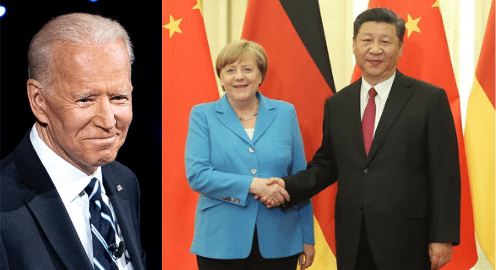 German Chancellor Angela Merkel is literally trying to befool the United States of America and the rest of the democratic world. While Trump was upping the ante against Beijing and going after China-based tech giant Huawei, Merkel pretended to play along. But after Joe Biden’s apparent ‘victory’ in the US Presidential polls, Merkel seems to be bringing back the Chinese telecom major in her country’s 5G networks.

As per German business daily Handelsblatt, Germany will allow Huawei to build a part of its 5G network. The German daily carried this report after viewing a draft law that the Merkel administration will submit to the Bundestag, Germany’s Federal Parliament, next month.

Merkel’s decision allowing Huawei to play a role in Germany’s 5G network is quite an about-turn on her part. Only in September, it was reported that Germany was likely to impose tough restrictions on telecoms equipment-providers. The restrictions were supposed to target Huawei and exclude the Chinese telecom giant from the buildout of Germany’s 5G networks.

At that time, it was also reported that the Merkel cabinet was planning to pass an IT security bill, creating bureaucratic hurdles which could have hampered China’s 5G ambitions in Germany. But now Angela Merkel’s gameplan regarding Huawei is becoming clear. Even when Germany pretended to impose bureaucratic restrictions targeting Huawei, Merkel did make it a point to resist an outright ban on the Chinese telecom major.

Within Germany, Merkel was facing a lot of pressure on the Huawei issue. Leaders from Merkel’s own party, the Christian Democrats (CDU), were campaigning against Huawei. To make it worse, Trump too threatened to cut off intelligence sharing if Germany did not ban the Chinese telecom giant.

At some point, Merkel must have realised that Trump wouldn’t back off on the Huawei issue. The US President has been running an unprecedented crusade against Huawei. He has been relentlessly convincing the free world to act against the Chinese telecom major, over allegations of security concerns.

Merkel, however, remains China’s most generous friend within the European Union. She did not really want to act against Huawei and ruin Beijing’s 5G tech domination ambitions in Europe. So, the Merkel administration came up with a brilliant idea- she pretended to impose insurmountable bureaucratic restrictions hampering Huawei but kept a window of opportunity open by resisting a full ban on the Chinese telecom giant.

If Joe Biden comes at the helm of affairs, then he is expected to go soft on Huawei. And even if Biden doesn’t befriend the Chinese telecom major due to the fear of a political backlash, he would at least not be as hawkish as President Trump over this issue. Berlin itself expects that Biden won’t make any demand to act against Chinese interests, unlike Donald Trump who could go as far as jeopardising the Euro-Atlantic alliance if European powers did not get their act together.

Merkel thus successfully faked acting against China, till the time she knew that Trump is at the helm of affairs in the White House. But after the disputed US Presidential Elections, she seems to be thinking that Biden would come to power and therefore the German Chancellor is once again strengthening Sino-German ties.