With Biden’s victory, Macron seeks support from India’s PM Modi for his war against radical Islam 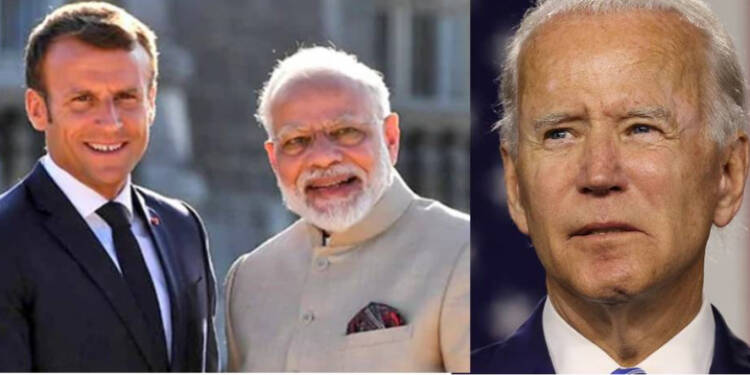 The elections in the USA have always had an international impact. Global nations often tend to rebalance their foreign policy calculations as per the victor and their inclinations and opinions. Similar things are going on with the French government under Emmanuel Macron, as he tries to balance his anti-Islamist policy with the coming of what looks like a Biden administration next year. In such a scenario, as per HT, President Emmanuel Macron called Prime Minister Modi to discuss wide-ranging issues including the digital and strategic autonomy, deepening defence cooperation, Indo-Pacific, and the security environment in Asia and West Asia.

It is no hidden secret that many democrat donors and the extreme left wing of the democratic spectrum flirts with the Jihadis, Islamists and other ideological centres of Islamist terrorists. Be it Ilhan Omar or Rashida Tlaib, or Muslim Brotherhood or their proxies in the USA, it does not take long to create the obvious linkages. However, if the environment in the USA has taken this turn, it makes it difficult for Macron to take strict steps to rid his country of extremist, fundamentalist, Islamists.

Yet, France cannot afford to stop its fight against Islamists as it will make the country vulnerable to other terror attacks and this cannot be done. Which is why, Emmanuel Macron has called his most trusted friend whom he can rely on, PM Modi, to gain his support for France’s fight against radical Islam.

HT cited people familiar with the matter, who said that the two leaders have decided to set up a hotline. The move comes against the backdrop of France’s greater focus on the Indian Ocean and China’s aggressive posture across the region, in addition to this, the changing dynamics in the USA and the fight against radical Islam may as well be the reasons.

The French are confident that India will be by their side, and rightly so given how India supported French position when the whole Islamist and fundamentalist world were protesting against them and Erdogan even used the language that is unbecoming of a leader of a sovereign country.

Read more: France always stood with India, be it on Pokhran or Kashmir. Today, India is standing strong by its side.

India, on the other hand, can be a precious asset for the French in their fight against Islamist Terrorists, as New Delhi has a long experience of dealing with these kind of situations. India has learnt how to deal with their modus operandi and under PM Modi, it has created deep-rooted intelligence networks, as well as trained its task forces to deal with any exigencies. With such elaborate understanding, preparation and sea of experience, France will be better off taking Indian help and learning from its expertise, than adopting hit and miss method of learning.

India under PM Modi has brought Paris and New Delhi, much closer than they ever were. And it is not a mere coincidence that the strategic partnership between India and France was established in 1998, during the previous BJP-led government. And now with the USA turning the other way, and Macron making the initiative to call Indian Prime Minister, means that France is seeking Indian support in its fight against the serious threat of Islamist terrorists and radical Islam.