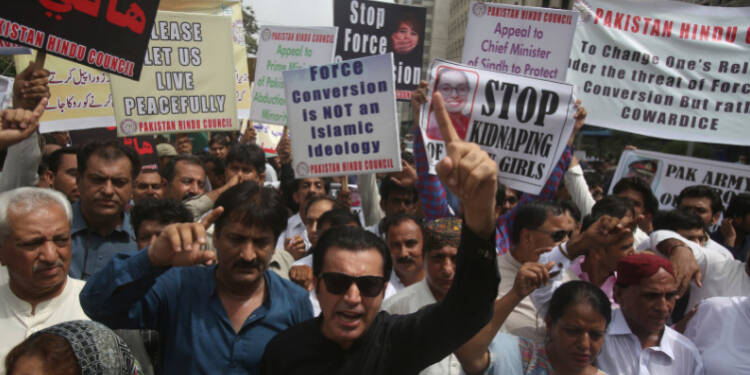 Pakistan and China — the two countries notorious for stifling the voices of minorities and women are now colluding amongst themselves to buy and sell Hindu, Christian women as concubines (mistress). According to several media reports, US Ambassador-at-Large for International Religious Freedom Samuel Brownback has said that Pakistan is marketing Hindu and Christian women as “concubines” and “forced brides” to China.

The top diplomat cited discrimination against religious minorities as one of the reasons for the ill-practice that has evolved into a fledgeling trade.

“We just had really a difficult webinar this morning on forced brides into China, and one of the source places is Pakistan religious minorities, Christians and Hindu women being marketed as concubines or forced brides into China because there’s not effective support, and then there’s discrimination against the religious minorities that make them more vulnerable,” he said

It is imperative to note that in December 2019, Associated Press had accessed a list of 629 Pakistani girls and women, who were sold as brides to Chinese men and taken to China in 2018 and up to early 2019. The list was prepared by Pakistani investigators. Once the “forced brides” arrive in China, they are usually kept in isolation, ignored, abused and sold into prostitution. The AP probe had revealed that traffickers target Pakistan’s poverty-stricken Christian population, pay an amount to desperate families to marry off their daughters and sisters to Chinese men.

China’s one-child policy has created a severe gender imbalance in the country. Ordinary Chinese families give preference to a male offspring and thus, the Chinese men when grown-up look towards Pakistan which supplies religious minorities women in hordes, in exchange for a few nickels.

After Samuel made his scathing observations known to the journalists in the audience, a fanatic Pakistani reporter, instead of following up on Samuel’s statements, questioned if there was a double standard in Pompeo giving Pakistan the CPC designation and not India. However, Brownback hit back saying that while in Pakistan, a lot of the actions against minorities are taken by the government, which was not the case in India.

Samuel further attacked Pakistan saying it was designated as a country of particular concern (CPC) under the International Religious Freedom Act, due to its mistreatment of religious minorities.

US Secretary of State Mike Pompeo on Monday designated Pakistan and China along with eight other countries that are of particular concern for engaging in or tolerating “systematic, ongoing, egregious violations of religious freedom.” The US Commission for International Religious Freedom (USCIRF) had recommended to the State Department to designate India also as a country of particular concern (CPC). However, the Secretary of State, knowing the ground reality of India refused to accept India’s inclusion in the list. New Delhi had also rejected USCIRF’s observations.

This is not the first time that Chinese men and their atrocities on religious minorities and their women have come to light. In the Xinjiang Autonomous Province, where millions of Uighurs are being kept in concentration camps, the members of the Politburo and the ordinary Han Chinese forcibly enter the households of Uighur women and sleep with them, to create a lineage of pure Chinese ancestry.

China and Pakistan are a blot on human society and, fundamentally, nations across the globe should raise their voices against the mistreatment of minorities and women in such countries. The detractors of CAA in India should look at these reports and understand why these minorities need India to become their haven.