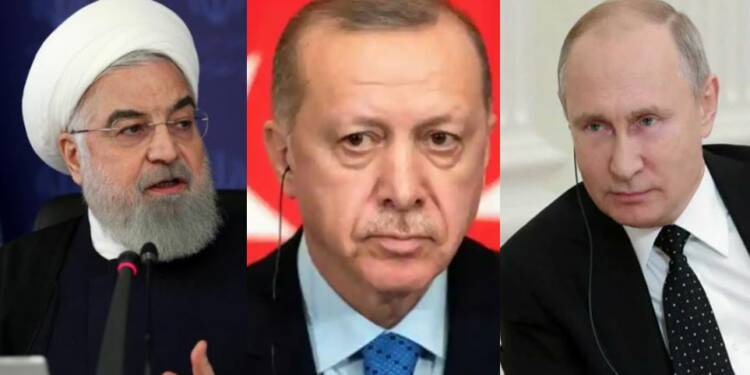 The Nagorno-Karabakh skirmishes between Armenia and Azerbaijan have opened up a new round of geopolitical struggle in the South Caucasus region. While the general opinion is that Turkey-backed Azerbaijan has been able to overpower Armenia- a key Russian ally, a new narrative is now building up. Iran, a Shi’ite nation with an Azeri minority, has suddenly come into the picture.

Tehran seems to be entering the Nagorno-Karabakh conflict, and Russian President Vladimir Putin is happily emboldening it. Iran has a problem with Turkish apprehensive Recep Tayyip Erdoğan’s Azerbaijan campaign because as Ankara whips up Azerbaijani or Turkic chauvinism, Tehran starts getting apprehensive about Azeris developing separatist tendencies within the Shia-majority Iran.

When the Nagorno-Karabakh conflict started to heat up a few months ago, it came to light that Russia might be tempted to support Armenia, a key Russian ally. Iran figured prominently in any Russian plan to rescue Armenia from a Turkey-backed Azerbaijan, and Baku even claimed that “more than 400 tons” of military goods were provided by Moscow to Armenia “via the airspace of Kazakhstan, Turkmenistan, and Iran”.

So, Iran was always in the scheme of things for Russia. But Moscow wasn’t able to effectively fight Turkish mercenaries and Azerbaijani forces for the simple reason that Iran was too unwilling to get involved.

The main concern for Iran was to avoid a sense of separatism taking control of the Azeris in the Shi’ite nation. In fact, Iran’s North-western region of Azerbaijan, where Iranian Azeris live, shares a sensitive border with the independent State of Azerbaijan.

So, Iran just waited for Russia and Turkey to douse the fire in Nagorno-Karabakh. However, much to Iran’s chagrin, Erdoğan started inciting Azeri separatism within Iran even after the Nagorno-Karabakh conflict came to a purported end. During a visit to Azerbaijan, Erdoğan recited a poem about the partition of Azerbaijan’s territory between Russia and Iran during the 19th century. The poem was seen as a reference to the Azeri-majority area of Iran.

The diplomatic tensions between Ankara and Tehran are now escalating. After Iran rebuffed Ankara over Erdoğan’s controversial poem, Turkey summoned the Iranian Ambassador. Turkey’s Communications Director Fahrettin Altun blamed Iranians and claimed that they had distorted the meaning of the poem “to fuel senseless tensions.”

Altun added, “It must not be forgotten that Turkey stood in solidarity with the Iranian state and people, despite the risk of having to endure international pressures, at difficult times for Iran.”

Meanwhile, Russia is constantly pushing Iran to take on Ankara. In a show of solidarity, Russian Foreign Minister Sergei Lavrov even claimed that Moscow continues to reject American sanctions on Iran.

During an interview with Iranian state television, Lavrov said, “We do not just refuse to recognize unilateral sanctions, but support Iran with specific measures.” The Russian Foreign Minister added, “Perhaps we are doing more than anyone else. In terms of figures, this amounts to billions of dollars.”

So, at a time when the Iranian economy has come under deep stress due to sanctions from the White House, the Kremlin is sending a very clear message to Tehran. Putin is trying to tell Iran that if the Shi’ite nation can take on Turkey then Russia will support the troubled Iranian economy.

Tehran itself has shown the intent to confront Turkey over how Erdoğan’s actions can provoke separatism within Iran. If Iran decides to play a bigger role in the Nagorno-Karabakh dispute at Moscow’s behest, then Russia will certainly enjoy a position of advantage in the South Caucasus region. Not only will Turkey have to face a new enemy, the Kremlin too will find it much easier to access the disputed region.

Just when everyone thought that Turkey had won the Nagorno-Karabakh conflict, Putin has turned the game upside down by pitting Iran against Turkey.