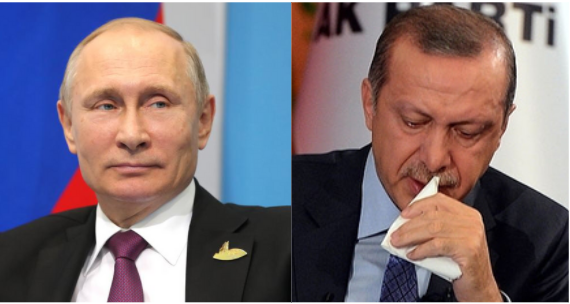 The global political scenario observed in recent times has been an extremely busy one. One of the most significant events was Azerbaijan’s war with Armenia over the territory of Nagorno-Karabakh. In the war, Turkey-backed the Azeri forces extensively but even with the established military relations between Armenia and Russia, Moscow decided to remain quiet in the case of conflict. Russian, by any mean, did not get directly involved in the armed conflict. The speculated reason was noted by scholars to be the Russian arms sales to the region and its efforts of Moscow to increase Turkey’s influence in Azerbaijan.

But this soft stance taken by Russia had multi-folded reasons. President Putin choosing to remain passive on the issue of conflict was a well planned and cleverly executed decision against the most rogue member of the NATO alliance- Turkey. It is undoubtedly proven that the Turkey of today is the most arrogant and problematic member of the North Atlantic Treaty Organization.

Many of its decisions have angered all members of the alliance including the US. Turkey is also out of the good books of the European Union, most probably permanently. As a result, both the US and the EU have put sanctions and trade embargos on Turkey. Now Putin wants to enter the picture as he intends to gain from the plight of Turkey. He wishes that Turkey faces even more sanctions and as a result, Ankara’s influence in countries like Azerbaijan gets wiped out entirely.

In its efforts to push back Russian forces from the region, Turkey had deployed its military-backed by Unmanned Armed Vehicles (UAVs). But this offensive stance projected by the Turkish forces didn’t deter Moscow from playing the role of a mediator between Azerbaijan and Armenia. Russia under President Putin was angry due to the disturbances in erstwhile Soviet Union territories but he didn’t express it openly. This was the first challenge of Turkish President Erdogan to the otherwise aggressive Vladimir Putin, the Russian President.

But the Russian President is patient enough to remain calm as the relation between Turkey and other members of the NATO collective worsens. American President Donald Trump has already given a go-ahead to a series of plans against Turkey after it acquired the Russian made S-400 missile defence system. This can further foil the dreams of Turkish President Erdogan to become the new Khalifa of the Muslim world.

Turkey has seen meddling in a lot of regions with significant Russian influence. To emerge as a regional power and a leader of the grouping against the US-led security collective in the region, Ankara has treaded the regions which have historically been under Kremlin’s influence. A senior Russian officer told Bloomberg recently that the relations between Turkey and the West “shall remain sour” for a significant amount of time and Erdogan might never learn to grow up and behave.

The European Union is planning to put some heavy sanctions against Ankara. The EU leaders have expressed their wish to prohibit Turkish officials and organizations from working in the Gas Drilling projects in Cyprus’ Waters. Meanwhile, they have delayed the big decisions trade, tariff, and arms prohibition against Turkey till they discuss it with the upcoming Joe Biden administration.

After Turkey purchases the Russian defence system, the US is more than ready to put more sanctions against Turkey. As reported by Reuters, the announcements shall be made very soon. It was decided just the last year that because of Ankara’s decision, it will be removed from the F-35 Fighter Jets Program. This development had halted Turkey’s plans to acquire more than 100 fighter jets. Even Joe Biden had criticized the behaviour of Erdogan and wished to support the Turkish opposition. The relations between the US and Turkey are not going to become stable very soon and that is what Russian President Putin desires. Another NATO member France has also been at a war of words with Turkey after French President Emmanuel Macron announced his war against radical Islamic Terrorism.

President Putin very quietly took a back seat in the world bandwagon against Turkey. He is waiting for the events to unfold. If NATO fights within itself, Putin stands to gain the most. First of all, other countries will rush towards Russia to seek help and there shall be a full-stop to Turkey’s increasing influence, hence, Russia shall regain its lost ground in old Soviet territories. This is the reason why Russia is still going soft on the whole issue.