As India revives the IORA, France joins the massive multilateral grouping in a major setback to China 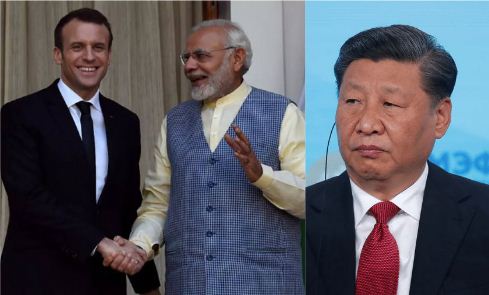 India has brought back the effectively dead Indian Ocean Rim Association to life and the inclusion of France as a permanent member to the grouping has strengthened Indian efforts to limit Chinese expansionism and hooliganism in the region.

On Thursday, the United Arab Emirates hosted the 20th meeting of the Indian Ocean Rim Association council of ministers virtually, India welcomed France into the grouping with open arms and pushed forward the need of the hour to address the urgent China threat. France, which is a big and global naval power has been on the same page with India on a plethora of issues like radical Islamic terrorism and the need for diversifying the global supply chains.

The Indian Ocean is of paramount importance for the peace and prosperity of the region. The region needs utmost cooperation, and mutual respect in the areas of shipping, maritime safety and security, fisheries, travel and tourism, disaster management, and others to establish a ‘blue economy’ in the region. India and Australia, the two-member states have a well-defined plan for engaging the region in developing the Blue economy.

A well-established platform for cooperating on eco-tourism, creating the Indian Ocean Tuna Commission, the research and development of marine and bio-resources for medicinal purposes, and economic investments are some of the initiatives propounded by India for the region. India professes open regionalism for boosting economic cooperation especially in the fields of trade facilitation, investment, the region’s social development, and promotion, thus the direct entry of France in the region holds deep importance.

France was welcomed as the 23rd full member of the collective much to the dismay of China. Chinese neo-imperialist Belt and Road Initiative poses a threat to the regional peace and stability and France’s decision to exercise trilateral military drills on land and sea with Japan and the US is seen against China’s rising military interference in the foreign territories, wanting to become the bully on the block.

India’s decision to involve its oldest strategic partner in the west- France in the region will take forward the mutual approach of both countries regarding the Indo-Pacific region. It should be noted that France was the first European country that launched an Indo-Pacific strategy. India and France are already working on establishing extensive cooperation mechanisms between foreign offices, the military, ministries of defense, and civilian entities.

The cooperation between India and France in the Indo- Pacific region has become the issue of most concern as they are working closely in the western and southern Indian Ocean. India and France have reiterated multiple times that the Indian Ocean region and the wider Indo-Pacific region should be a stable, multipolar, and rule of law-based region without the hegemonism of a certain country. The region holds extreme importance for France, it has its overseas territories in the region and about 1.5 million French people call the region their home.

Since the center of gravity of the world economy has also shifted to the Indo- Pacific from the Atlantic, it becomes essential for France to have a solid presence in the region. France has a permanent military presence in the region with about 4,100 troops stationed in the Indian Ocean to protect its interests and maintain the stability of the region together with its partners India, Australia, Japan, and the US. Therefore, its inclusion in the grouping should be seen as a natural progression, and with the current situation where China is saber-rattling the region, France’s involvement in the regional efforts is inevitable.

China will have to realize that there is no room for expansionism in this modern world and expansionists like China need to be checked. China’s irresponsible territorial claims that depend on 2000-year-old fictional accounts are doing it no good, just because of its unnecessary expansionism, it is on the spree of losing friends and making enemies at a fast rate. China’s penchant for playing petty threatening games is buying it no fruit, with the countries like France landing in the Indo-Pacific ring to give a direct jibe to China. It is now fair to assume that France is all set to become the next member of Quad and the pressure on China is building up at a fast pace.