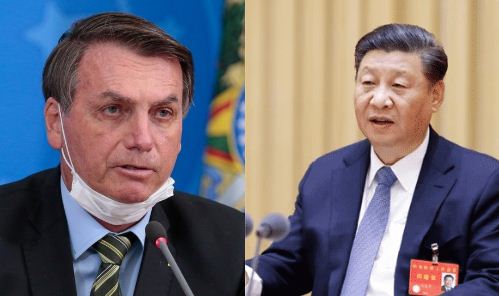 China’s President Xi Jinping wants to revive the Chinese economy. And he plans to do so with a splurge on infrastructure projects. Earlier this year, it was reported that local governments in China were looking to raise special bonds to the tune of 565 billion dollars to fund rail, roads and airports, across the country. But China is facing an acute crisis of the most basic inputs- iron ore and coal.

Iron ore and coal are needed to manufacture steel, which plays a critical role in infrastructure projects and other industries. But China first shot itself in the foot by imposing unofficial restrictions on Australian coal. And now, China is battling an acute shortage of iron ore. Supply disruptions in Australian iron ore have led to a surge in the metal’s prices. China wanted to turn to Brazil, but Brasília is also drilling a hole in China’s pockets.

As per argusmedia, Australian government commodity forecaster- the Office of the Chief Economist or OCE, has raised its prediction for Chinese iron ore demand by 4.5pc to 1.21bn t, up from its September forecast of 1.16bn t. The higher demand is being driven by the impact of government spending on infrastructure projects.

But China’s biggest iron supplier- Australia, was hit by storms recently, which caused a disruption in the supply of the crucial metal. Senior analyst at commodity firm CRU, Erik Hedborg, told CNBC earlier this month, “There is now a tropical storm approaching the coast where all the iron ore is shipped from, and two of the biggest ports in Australia have now been shut, and they together account for just over half of global iron ore supply.”

Earlier this month, iron ore supply disruptions led to its price reaching US$160 a tonne- almost double the price at the start of the year. And then Xi Jinping’s desperate trade war against Australia isn’t helping Beijing either. The paper dragon, therefore, wanted to bank upon Brazil- China’s second-biggest iron ore supplier, as an alternative to Australia.

However, Brazil hasn’t bailed China out of its steel crisis. As per the OCE, Brazilian iron ore exports aren’t going to pick up. The commodity forecaster predicts Brazil’s iron ore exports at just 269mn t- a sharp decline of 26pc from its earlier forecast of 366mn t.

Brazil has its own set of issues in the iron ore sector. In January 2019, a deadly dam disaster at Vale iron ore site led to its stalling production at ten locations. Vale is the world’s second-biggest iron ore producer and supplies mainly to China.

As per Vivek Dhar, Director of mining and energy commodities research at the Commonwealth Bank of Australia, Brazil has since struggled to achieve the 2018 iron ore export levels.

And then China shouldn’t expect Brazil to make any special efforts for ramping up iron ore exports. Sino-Brazilian ties are at an all-time low. Brazil’s President Jair Bolsonaro is the face of anti-China sentiment in Latin America. And then the Wuhan Coronavirus outbreak in Brazil has only ignited more hatred towards China in the South American nation.

Also, China has irked Brazil by wrongly alleging that it found the Wuhan Coronavirus on the packaging of Brazilian beef, in an apparent attempt to restrict its imports in China.

China’s iron ore demand is expected to remain high over the next one year. But Xi cannot expect any respite from either Australia or Brazil. Iron ore supplies are going to remain disrupted, and therefore the Chinese President’s plans of a major infrastructure splurge may as well be done and dusted.