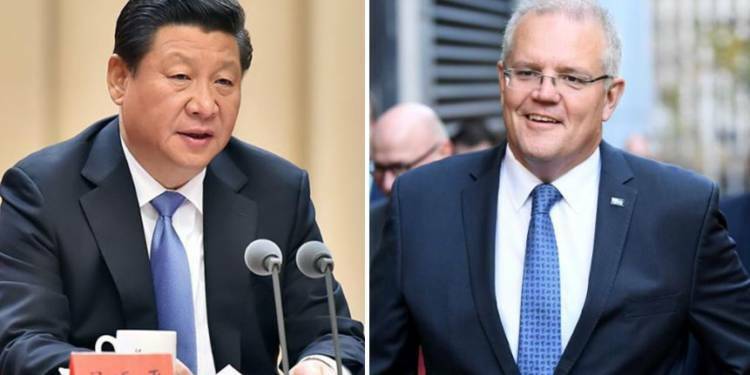 China’s massive, fishing fleet that has exhausted the resources in its waters and now prowls the Atlantic, the Pacific, and the Indian Oceans for more has now turned its sight on Australia. Amidst the ongoing diplomatic and trade disputes, this could only mean one thing more confrontational diplomatic headache as Beijing uses its fishing vessels to wage a ‘hybrid war’.

Beijing’s fishing militia is an extension of China’s diplomatic tools. The fleet controlled by the CCP is being used to increase friction between states diplomatically, coercing them and threatening them. Australia has been targeted by China since it called an open international investigation on China over the origins of the Wuhan Virus. Beijing failed repeatedly to coerce or corner Australia through trade sanctions or devious diplomatic practices, thus, it has now turned to its coercive fishing fleet but Australia is already waiting for them.

The rock lobster industry of Australia is only one of several goals of the punitive economic actions of Beijing. Beijing’s fishing fleet may come for them: the location of a planned new $218 million Chinese port is right in the centre of the Torres Strait rock lobster fishery. So now, Australia’s fishermen are concerned.

But former government Foreign Policy Advisor Philip Citowicki of Australia is still doubtful. He writes “The reality is that it continues to seat PNG at the centre of a tug of war, where the presence of China’s authoritarianism is increasingly imprinting itself on the fledgeling democracies of the Pacific.”

In 2018, the Lowy Institute predicted that Beijing’s fleet “may soon create new security headaches for Australia”.

David Brewster of the Lowy Institute wrote “The impact of Chinese fishing has important strategic consequences for Australia’s region in several ways,” and “There is a good chance that fishing will become a key locus of disputes and incidents involving China.”

But these tactics of Beijing’s fishing militia are not new. The fleet operates as an extension to the CCP’s party political guideline. Key factory ships have Communist Party commissars watching over the captains and their operations, while selected crews are trained to work in concert with the PLA Navy.

The Chile Navy is on alert due to the presence of 400 Chinese fishing vessels in the international waters of which 11 have so far crossed into its Economic Exclusive Zone.

The Chinese embassy in Ecuador maintains that Beijing has a “zero-tolerance” illegal fishing policy but only a few reports are followed up. Fewer are reaffirmed.

Indo-Pacific analyst Blake Herzinger of the Centre for International Maritime Security (CIMSEC) says international governments are starting to wake up to the damage done.

He writes “Globally, economic losses from illegal fishing are difficult to quantify, but there is little disagreement that the overall economic loss totals tens of billions of dollars yearly, encompassing lost tax revenue, onshore fishing industry jobs, and depletion of food supplies.”

Chile, Colombia, Ecuador, and Peru – the quartet of South American nations are concerned about their fisheries being plundered.

They released a joint declaration in November stating that they would combine their resources “to prevent, discourage and jointly confront” any illicit fishery activity.

They did not mention China. But it is difficult to ignore the fact that the sight of so many of China’s large, modern fishing vessels off the coast led to the declaration.

And since July, when the fishing boats got captured in the international marine reserve surrounding the Galapagos Islands of Ecuador, this particular fleet has been the subject of world attention.

Beijing’s massive fishing militia is fuelled by the CCP coffers, the massive fuel subsidies allow the Chinese fisheries to undercut its international competitors significantly. And in return, Some boats do no fishing whatsoever. Their task, instead, is to track the active fleet, harass other nations’ fishermen, or simply sit provocatively in the territory of another country.

Some boats do no fishing whatsoever. Their task, instead, is to track the active fleet, harass other nations’ fishermen, or simply sit provocatively in the territory of another country.

That makes them a diplomatic tool, part of the determination by Beijing to wage the “hybrid war” – to use all available means without conventional weapons – to assert its will.

Therefore, Australia is ready, as it has identified the threat the Chinese fishing militia poses and just like it struck back against aggressive trade and diplomatic actions are ready to deliver a massive punch to the fishing militia arm of the CCP.