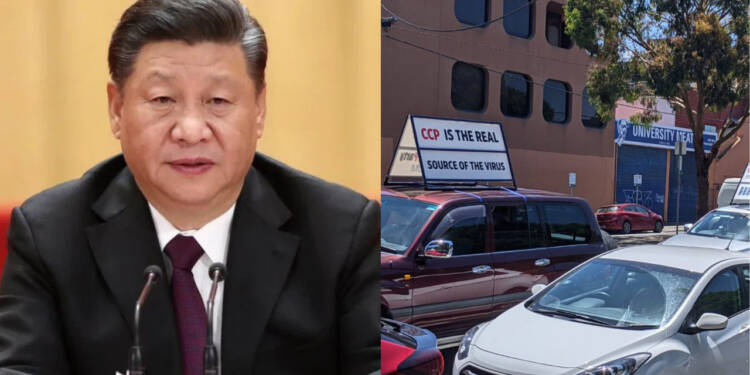 The Chinese Communist Party (CCP) rule in China epitomizes how an elitist organisation with an ideological pathology can take over a beautiful civilisation and ruin it completely. For the past seven decades, China has suffered under the slavery of the Chinese Communist Party, but now we are seeing clear signs of an anti-CCP rebellion from Chinese expats.

The recent pushback against the CCP emerged from Chinese expats living in the free world outside China. We are talking about a recent car rally in Australia that was organised by a group of mostly Chinese-Australians. As per The Epoch Times, a rally of around 40 cars was held in Melbourne’s Northwest to raise awareness about the malign influence of the CCP in Australia.

This was the second such rally held in Melbourne this year. The participants fit their cars with anti-CCP banners displaying slogans such as “Protect Australia From CCP Influence,” “Communism Puts Everyone At Risk” and “The CCP Does Not Represent The Chinese People.”

The event was organised by the local branch of the Global Service Centre for Quitting the Chinese Communist Party, or what is more commonly referred to as the Tuidang Centre. Tuidang Centre is a non-profit organisation devoted to the cause of helping Chinese people “Quit the CCP,” and understand the true nature of the Communist ideology.

As per Morgan C Jonas, an independent journalist who attended the unique car rally, Chinese-Australians exposing the CCP are at great risk of being targeted by the Chinese Communist agents. Chinese-Australians are therefore igniting a rebellion against the Chinese Communist Party at a high risk of personal harm. Morgan said, “They are taking a tremendous risk to voice these concerns.”

Armstrong, one of the rally-goers has been quoted by The Epoch Times as saying, “They [CCP] want to take control over the whole world right, basically, and once you get to that level of power, you just want more.”

But the unique car rally held in Melbourne’s Northwest is merely an example. There must be millions of Chinese expats or people with strong Chinese ancestry roots living in different parts of the world, who understand the exploitative character of Chinese Communism.

In fact, ‘End the CCP’ rallies have been held in several cities across the world since 2005. As of December 21, around 370 million people have reportedly quit the CCP and its affiliates.

The Chinese expats presumably do feel incompatible with the CCP-dominated society in China, once they move out into democratic countries like Australia or the United States of America. As Chinese expats, they do understand how unfortunate they were to be born in a prison of a country, and they probably do feel concerned about their families back home who still don’t have the liberty of living in the free world.

Chinese expats realise how democratic systems, constantly badmouthed by CCP diplomats and politicians, are actually far better than a Communist-authoritarian system. The natural anxiety in Chinese expats is fuelling an unstoppable rebellion against Chinese Communism, which will grip the Chinese society sooner or later and free the beautiful civilisation from the clutches of the CCP.