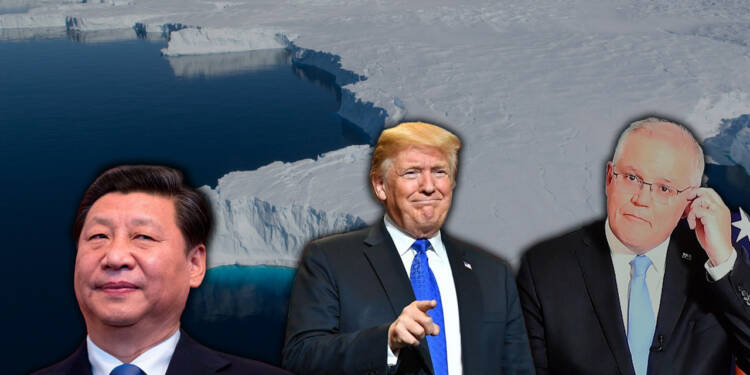 The Antarctic is witnessing the most unimaginable situation of 2020, as China is helping Australia and the USA in their Medevac program. And it is unimaginable because China at the same time has a trade embargo on multiple goods from Australia and is in an undeclared Cold War with the USA. Both the USA and China are helping Australia with the extraction of an Australian expeditioner who is suffering from a medical condition not related to COVID-19.

However, as the Chinese actions and their arrogance have become world-renowned facts, these actions are not from a large-heartedness but a calculated strategic purpose. As Beijing is getting contained by the Asian allies of the United States and losing face due to the abject failure of its wolf warrior diplomacy, it needs a face-saver and also requires some gestures of goodwill to keep its designs for the domination of the resource-rich Antarctica afloat. And thus, as it is trying to get its presence felt in the region, what is better than the current opportunity.

China’s Antarctica ambitions have been public in the foreign policy spectrum for quite a while. Since the arrival of the pandemic from Wuhan, there has been a decline in research activities by countries like Australia and the United States in Antarctica. But, it is believed that both Russia and China have been taking advantage of this ceding of space to solidify their presence in the southern continent.

A great power game in Antarctica could unfold anytime soon as China lays claim on the Antarctic. While military activities are prohibited in Antarctica, experts say, “Russia and China were using the guise of scientific research to stake a further claim on the continent”. Peter Jennings, the Executive Director of the Australian Strategic Policy Institute said, “China’s interest in Antarctica is not limited to the short term”. He also thinks that Chinese interests in the Antarctic are not “shaped by scientists.”

China’s interests are driven by several factors ranging from controlling the majority of the world’s natural resources, gaining new fishing grounds among others. China has dried up its coastal fisheries due to overfishing and is now exploring other parts of the world like the Galapagos Islands in Latin America and Antarctica is also on its radar.

Read more: The polar wars of China: Challenging Russia in the Arctic and Australia in Antarctica.

Kim Ellis, Australia’s Antarctic division director, said the medical evacuation process is relying on aviation support from the US and Chinese Antarctic programmes. Australia does not have its own intracontinental aviation this southern summer as it feared the continuation of the aviation could increase the possibility of COVID-19 reaching the icy continent.

“This operation is a testament to the strong international cooperation that exists in Antarctica, where nations band together and support each other in what can be a hostile and challenging environment,” Ellis said. “We are really pleased this first stage of this multi-phased operation, involving helicopters, planes and ships, is underway.”

Also Read: China plans to dominate Arctic trading routes by launching a satellite, but Putin is already waiting with his missiles

While appreciating the efforts and mouthing good words can be a strategically sound move, the Australians and other countries should not think this to be a precursor of a changed China. One must always remember, CCP never changes, it just tries to adjust itself concerning the world situation and slowly keeps at its goals. Instead of going gaga over the plastic efforts of the Chinese, every country should keep a vigil eye on the Chinese activities everywhere including Antarctica and stop it if it goes too far.