It's a cold and dark winter in China 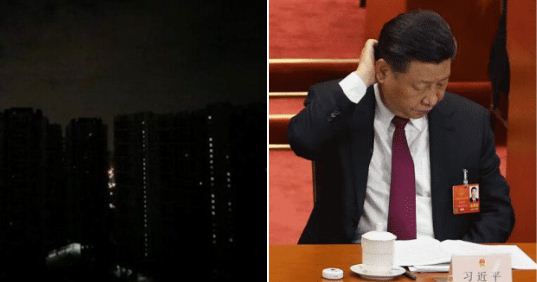 The Chinese have been creating problems under the leadership of Xi Jinping for its neighbours as well as people of its autonomous zone. But, this time, to satisfy his ever-increasing ego, he has brought suffering on its own citizens in the mainland. As the shortages of high-quality Australian coal has hit the country suddenly, courtesy China’s decision to block all imports of Australian coal, Chinese authorities have limited the amount of electricity supply to many provinces.

People in China are literally being rationed electricity and their daily activities are being governed to a very minute level, so much so that provincial government agencies south of Shanghai were ordered to turn on the heat only if the temperature falls below 3 degree Celsius and even then, the thermostat can only be turned up to 16 degree Celsius and not beyond that. This is more than enough of a proof to establish that China is facing acute coal shortages in its thermal power plants and as winter arrives it is not able to manage the plummeting coal supply. However, if we move beyond the geopolitics, tens of millions of people are being subjected to brute communist diktats, reminiscing the dark ages under the rule of Mao Zedong.

According to The Australian, power shortages are increasing in China with millions of citizens resorting to rationing their heating over winter and avoiding using elevators. A Chinese energy insider told the publication, “You cannot pretend that bad relations between China and Australia haven’t contributed to this situation.” In 2019, Australia supplied the majority of China’s thermal coal imports for power stations and more than 40 per cent of the nation’s imports of coking coal. And any amount of times, the Chinese Communist Party tries to deny by presenting flawed and cooked up statistics that the current crisis is not the result of the brutal dictatorial order to stop the import of Australian coal, this does not change facts on the ground.

Desperate geopolitics and Xi Jinping’s ego is driving China’s terrible decision to reject Australian coal, but at an official level, the CCP claims that the rejections are being made due to internal export quotas being reached and the current crisis is being blown way out of proportion and it has nothing to do with Australian coal. However, the ground reality is completely different and Chinese officials cannot accept it, given the repercussions they will face for hurting the ego of Xi Jinping.

Residents, factories and businesses in Hunan, Zhejiang and Jiangxi provinces have been hit badly with electricity shortage and the provincial administration has ordered rationing of electricity in some areas citing a shortfall in coal supplies, according to local media reports and government notices. As per news report, posts on Weibo captured scenes of havoc from the inland province, including elevators that stopped in blacked-out office buildings and all this as per government orders.

The fact that the government too was caught by surprise means that they too were not expecting it and the top-down sudden order by the Xi Jinping has hit the people, businesses and provincial administration alike.

China is once again proving that the ego of Xi Jinping is more important than the suffering of the tens of millions of people facing power shortages in the winter conditions. Basically, the CCP is willing to sacrifice its people rather than accept the mistakes of Xi Jinping and mend its ways. And thus, by forcing its citizens to bear long power cuts and not let them use the heating issue, Xi Jinping is literally trying to be the next Mao Zedong and take China back to the miserable days of Mao.