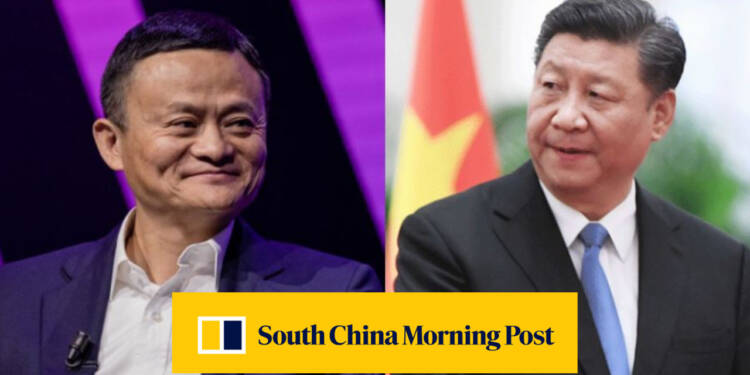 The South China Morning Post is seen by many as a credible source of news, exclusive reports and scintillating opinion pieces. Yet, the fact that the SCMP has two faces is not known to many. While the print version of the newspaper which is circulated daily in the erstwhile free city of Hong Kong is excessively turning pro-CCP and pro-Beijing, the digital version of the publication is beginning to tire putting up a democratic, bipartisan show. On more occasions than one, SCMP slips on its digital self too, and unabashedly goes ahead peddling CCP propaganda as credible news.

In light of the hounding of Alibaba Group particularly, and the Xi Jinping administration going hammer and tongs against the e-commerce giant, the SCMP is increasingly following the Chinese Communist Party line. There has been an unusual rise in the number of pro-mainland China and pro-CCP pieces being published in the SCMP in the past few days. Needless to say, the same can be attributed to the ongoing war between Xi Jinping and Jack Ma.

While Xi Jinping is the Chinese Premier, Jack Ma is the founder of Alibaba and the richest Chinese man, under which he is a tall figure in the mainland too. Yet, Xi Jinping wields brute political power, which is why it is close to impossible for Jack Ma to even think of taking the CCP General Secretary head-on. In first signs of Jack Ma conceding defeat and swallowing his ego, SCMP, which is owned by the Alibaba Group, has suddenly started doling out news stories and op-eds which toe the CCP line in a subservient manner no less.

Read more: How Alibaba strategically invested in South China Morning Post and turned it into yet another CCP rag

In one of its recent stories titled, ‘Indian tech workers seek lifelines as Chinese firms exit amid border stand-off and coronavirus pandemic,’ SCMP attempted to paint a grim, yet fallacious picture of abject unemployment within India because New Delhi had booted out close to 300 Chinese apps and tech majors out of the country in the recent months gone by. Somehow, SCMP tried to portray Indians as helpless and hopeless people, with nowhere to get employed after the exit of Chinese firms from the country.

In another story titled, ‘Covid-19: China’s industrial firms see 15.5 per cent profit growth in November as economic recovery continues,’ the Jack Ma-owned publication sought to project the Chinese economy at its rosy best, with strong indications of China pacing ahead of others in terms of economic recovery in the aftermath of the Chinese pandemic that engulfed the world. Of course, the fact that China’s financial institutions stand at the edge currently, and that the Communist nation is on the verge of a financial crisis induced by bad and unpayable debts all across the mainland, was given a miss by SCMP.

The most shocking of reports, however, are those which SCMP has published with regards to its parent company – Alibaba Group’s hounding at the hands of the Xi administration. The media outlet, at the behest of Jack Ma it seems, has decided to lie prostrate before the CCP. Its authority was stamped over the same assertion when SCMP, in a naked display of a lack of spine, ran two stories titled ‘Alibaba antitrust probe: not a sign winter is coming but a new start for tech industry, Chinese official media says,’ and ‘Alibaba antitrust investigation: what is the ‘picking one from the two’ practice that triggered an official probe?’.

In the two stories mentioned above, SCMP has tried its level best to peddle the CCP’s narrative over the anti-trust probe, which has been initiated against Alibaba Group, not to mention the Xi administration’s involvement in blocking Ant Group’s IPO from being listed at the Shanghai and Hong Kong stock exchanges.

Further, the Hong Kong-based publication has also sought to discount the entire fiasco which is ongoing between the Xi Jinping administration and Jack Ma’s Alibaba group, by submitting shamelessly to Chinese state media propaganda over the anti-trust probe, in fact, being a mere “necessary technical step to ensure the healthy development of the industry.”

Already, according to a Wall Street Journal report, Jack Ma had extended an olive branch to the CCP regime in early November by offering parts of his fintech firm Ant Group to the nation. However, an egotistical Jinping refused to entertain Ma’s ceasefire initiative and sabotaged his company’s fortunes.

The fact that a well-reputed and globally admired media publication would fall so disgracefully at the feet of the CCP only because Jack Ma wants to please Xi Jinping again is unthinkable, yet true. The SCMP saga also shows just how difficult it is for free media to operate independently anywhere close to China. For Jack Ma to attempt a win-over of Xi Jinping is far-fetched, and offering SCMP as a sacrificial lamb to the CCP will in no way save the billionaire’s business from being gobbled up by the Chinese Communists.

With Vietnam and the QUAD, India steps up pre-emptive moves to counter China in the South China Sea