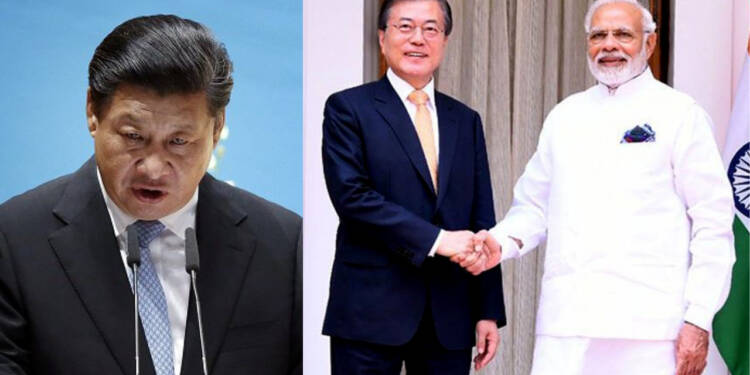 While the actions of the QUAD are the more flashy and may look more coordinated, the member countries in their personal capacity are reaching out to the prospective countries which can soon join the extended family of QUAD countries, which will be feasible for the formalisation of the organisation. In line with this, India and South Korea are constantly substituting their import and exports to each other’s country, to diversify out of China.

As per news reports, Jeonbuk Business Centre, a Business to Business (B2B) trade promotion agency which was launched earlier this year to promote and monitor India-South Korea trade, said that it is receiving more than 20 inquiries daily from Korean companies which are looking for prospects to buy industrial items, leather goods and organic products from India amid the ongoing COVID-19 pandemic. On the other hand, as India is engaged in an intense border standoff with China, Indian businesses are also looking for alternatives to Chinese toys and cosmetics which were in big demand in India.

The one more overlooked bilateral partnership which is picking up the pace and at a very drastic pace, is the bilateral trade relations between India and South Korea, as traders and businesses in both countries are looking for alternatives to Chinese products and in this regard, the relations are finding even more common ground than it ever did. Even though the trade ties have been really good among the two countries, the current priority of the countries has provided a big impetus to further the relations.

“Korea was buying organic fabric from China but now it is looking at India. Handicrafts and leather are the other categories of goods,” said Seo Youngdoo, official spokesperson Jeonbuk Business Centre. As per the Economic Times, India imported goods worth $15.65 billion in Financial Year 2020 from Korea, while its exports were at $4.84 billion.

The major items of India’s exports to South Korea include mineral fuels, cereals, iron and steel, while the imports include automobile parts, telecommunication equipment, hot rolled iron products, petroleum refined products, base lubricating oils, mechanical appliances, electrical machinery, and iron and steel products. However, if the current trends stand true, then the trade will see a sudden surge given the expansion of the sectors and opportunities of trade.

India and South Korea have signed Comprehensive Economic Partnership Agreement (CEPA) which is in the process of being reviewed as part of which India plans to seek concessions for its rice, grapes, pomegranates and eggplant exports to Seoul, this means that as India looks for exporting more food resources coupled with the farm liberalisation back home, the business prospects are sky-high. This comes as very scary news to China as it is already suffering from the trade wars with Australia and the USA, which is further exacerbated by the pandemic as well as the actions of the QUAD.

Read more: 2021 will mark the beginning of a docile China wanting to establish good relations with every country on the planet.

“Food, cosmetics and photonics are the other areas of interest of Indian companies,” Youngdoo said, adding that South Korean firms have expressed interest in India’s industrial parks and industrial items such as machines. The Koreans are already shifting factories from China and into India, as they are betting on the Indian PM Narendra Modi’s ‘Make in India’ drive, as a possible answer to the Chinese manufacturing hegemony.

India-South Korea bilateral bonhomie concerning trade and commerce can bring the already losing goliath-esc China down on its knees. India and South Korea jointly dumping China as their business destination and replacing it with each other is the last bit of good news needed for the year-end.