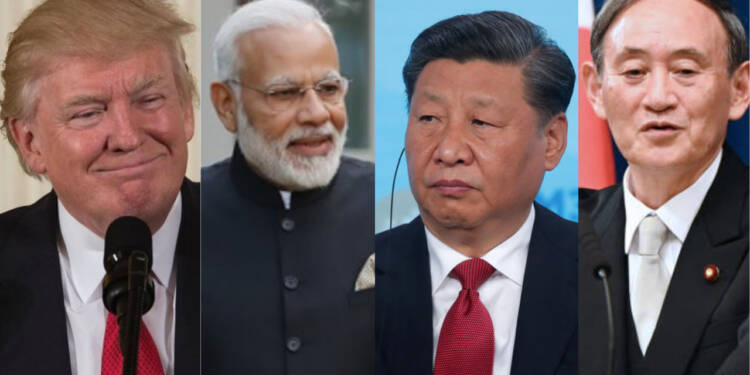 In what would be a decisive blow to China and its snooping activities. The United States, India, and Japan have raised their underwater activism to counter Chinese sea wing underwater drones. These drones under the cover of scientific testing, are Chinese underwater glide vehicles, used for espionage and intelligence.

In November, the QUAD countries participated in maritime exercises and it was intended to be a message to China. Through the exercises, observers said the participants hoped to turn the drill into a counterweight to Beijing’s increasingly potent military and political influence in the region. Now the operability has evolved as intelligence and technological capabilities are being shared to deter China’s rising hostility.

SOSUS is a sonar system that came into being when a solution to counter submarine warfare was being pursued by the US Navy. In 1951, to attack a submarine, the US tested its first series of hydrophones, initially laid down to deter Soviet submarines. But now the older one has been replaced by a more sophisticated SOSUS, also called a fish-hook (due to its shape and purpose), to monitor the ships and submarines of the PLAN.

Read More: With Vietnam and the QUAD, India steps up pre-emptive moves to counter China in the South China Sea

An Indonesian fisherman netted an object on December 20 that seemed to have the trappings of a Chinese underwater drone. The fisherman reportedly snatched a drone near the Selayar Islands, an archipelago in the central part of Indonesia that is part of Indonesia’s South Sulawesi province.

The netted object has close similarities to the Sea Wing UUV, a concept created and produced by the Shenyang Institute of Automation of the state-run Chinese Academy of Sciences (CAS). The Sea Wing, an underwater drone of the ocean glider type, moves forward in the water, supported by its wings and tail, by diving repeatedly and then surfacing again. Using an internal device, it conducts these manoeuvres a balloon that expands and contracts as pressurized oil flows in and out, which shifts its buoyancy.

Read more: Xi Jinping never expected India to be an active member of QUAD and now China cannot digest it

The “catch” has raised the possibility that the Chinese are already monitoring the passage of ships between the Indian Ocean and the South China Sea. This is troubling because these are crucial foreign shipping channels in the Indo-Pacific, an ocean stretch that has been dominated by the United States to date.

The Chinese are already questioning the status quo in the Indo-Pacific by racking up territorial claims in the South China Sea and fastening footholds in the Indian Ocean in maritime nations such as Myanmar, Sri Lanka, Pakistan, and Djibouti.

The QUAD’s increasing co-operability has increased, as they strive to forge a “free and open Indo Pacific”. The move comes as China’s espionage and snooping activities have increased. India has been at large trying to deter Chinese spying for a long time as India began to deploy long-range patrol aircraft like Poseidon-8I Neptune at its forward military base in Andaman Nicobar Islands.

Indian Navy inducted eight P-8I aircraft in 2009, after sealing a $2.1billion defence deal with Boeing, most likely 4 more of these aircraft will join the Indian Navy by January 2022. This deal with the United States and Japan will be more crucial as hostility towards the Chinese aggression in the international arena increases.

India has deepened its co-operation with Tokyo as a Japanese multinational provider of information technology services and products NEC, was roped in to lay optical submarine cable system between Chennai and Port Blair. The project commenced in December 2019 and was supposed to have ended by March 2020. It is apparently a 2300 Km long cable system that can carry 100Gb/s optical waves as reported by resonantnews.com.

Moreover, Japan’s decision to transmogrify its state secret laws to share intelligence with the UK, India, and Australia is the icing on the cake.

During the present rift between India and China, both Japan and the United States promised their support and backed India to counter Chinese aggressiveness along its land and water boundaries. The support of the QUAD to its members is beginning to bear fruit, increased cohesiveness and trust in the military domain will open up more areas of co-operation such as in the economic sphere which needs urgent attention in light of the huge diversification of the supply chain that needs to be carried out to lessen their dependence on China.