With Vietnam and the QUAD, India steps up pre-emptive moves to counter China in the South China Sea 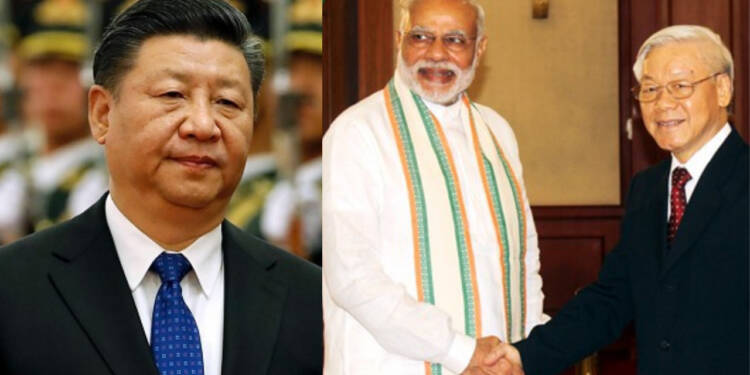 With China stepping up pressure in the South China Sea, India has risen to meet the Chinese challenge. With the QUAD behind it and Vietnam beside it, India is gearing up for what would be a decisive and tough route ahead as it leads the world against the Chinese belligerence.

China and the ‘CCP’ have been on a rampage throughout the year, with the Wuhan-virus. China’s aggressive and combative posturing in the South China Sea is a threat that needs to be dealt with. Thus, the QUAD is moving ahead to realise its vision of a free and open Indo-Pacific, free from Chinese destructive intrusion. And the South China Sea which has been a contentious issue for such a long time is now getting ready to become a flashpoint of big and regional powers.

In the South China Sea, the Indian and Vietnamese Navies will perform PASSEX or Passage Exercise. The Indian Navy ship INS Kiltan, which on Thursday reached Nha Rong Port in Ho Chi Minh City, will take part in exercises from 26 to 27 December. The Indian ship reached Vietnamese shores with 10 tons of humanitarian assistance under Mission Sagar 3.

“The current visit aims to strengthen maritime cooperation between the two navies and will further strengthen the strong bonds of friendship between the two countries and contribute to the safety and stability of the region,” the Indian Navy said in a statement.

High-level commitment, including defence participation, has increased between India and Vietnam. At the India-Vietnam virtual summit, New Delhi handed over the first of the twelve high-speed guard boats to the nation on Monday.

The PASSEX exercises are a first, since the Galwan incident at the beginning of the year, where Chinese aggression resulted in the death of 20 Indian soldiers. China has also violated the sovereignty of Vietnam in the south of China, attempting to take vast portions of the sea on its ‘Nine-Dash Line’ concept.

The UNCLOS or UN Convention for the Law of the Sea arbitral award has rejected China’s Nine-Dash line principle which asserts that 90.0% of the South China Sea, belongs to China.

Last week, India and Vietnam took part in a virtual summit with the agenda “to go ahead with giving teeth to the strategic partnership by increasing the bilateral commitments in military, trade and commerce as well as people to people contact” to contain a common neighbour which plays the role of a common aggressor in the Himalayas and the South China Sea.

The virtual summit came amidst the backdrop of increased Indian efforts to build the north-eastern infrastructure to increase the connectivity with its eastern neighbours, in addition to the efforts for the diversification of supply lines and intensive engagement with ASEAN countries by all the QUAD member countries.

Read More: Imagine a railway line that runs from India to Thailand and Vietnam. Well, it is going to be a reality soon

Moreover, China’s selfish economic stance and violent conduct in its peripheral regions have emboldened several states to stand up to its bullying. The Chinese movement has emboldened the QUAD’s agenda as more nation-states are increasingly trying to shore up with adequate measures to counter the intrusive and authoritative China.

India’s Act East Policy has been instrumental in combating China’s hegemonic tendencies. The Belt and Road Initiative (BRI) of China is bound to fail with India and Myanmar sealing the deal on the operation of strategic Port Sittwe and constructing a vital trilateral highway project with Myanmar and Thailand, China’s neo-colonial project. The Indian administration under Prime Minister Narendra Modi has been at the forefront of engaging more with ASEAN countries suffering at the hands of the CCP.

And more importantly, the QUAD has emboldened Vietnam by offering it leverage against China’s animosity. Australia and Vietnam are already in agreement to keep Chinese expansionism in check within the South China Sea. Every QUAD member is thus, looking to warm up to Hanoi and draft a deeper security alliance with Vietnam. The QUAD is giving money and muscle to Vietnam so that Hanoi can beat back the Middle Kingdom in the South China Sea.

The four countries of the QUAD are actively engaging with the ASEAN in all spheres with special emphasis on maritime security. With European countries coming on board, a system of ‘QUAD Plus’ seems plausible at the moment. It is now the responsibility of India to shape the new structure against the ever-persistent Chinese threat and with the current developments, India seems to be on the right path.