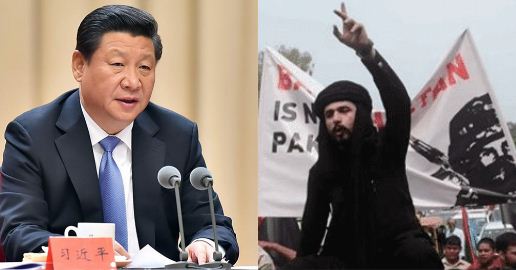 China’s President Xi Jinping harbours imperialist policies. He has thus made enemies all around the world. But did you know that Xi has also made enemies within Pakistan? We are talking about Balochs and Sindhis- two major Pakistani communities, who are giving a real nightmare to the Chinese President. So, who are Sindhis and Balochs? Sindhis and Balochs are residents of two Pakistan administered regions- Sindh and Balochistan respectively.

They have been protesting relentlessly against the CPEC- a section of Xi’s flagship Belt and Road Initiative (BRI). A frightened Xi now seems to have kneeled in face of such popular protests. As per a latest SCMP report, protests at the Gwadar port in Balochistan brought the challenges faced by the CPEC into limelight. On Tuesday, Ziaullah Langove, Balochistan’s Home Minister, had to reverse plans of fencing the Chinese-opwrared port facility in face of protests.

Now, the latest event is just a small hint of the kind of security and political problems that the US$62 billion China Pakistan Economic Corridor (CPEC) or any other Chinese investment faces in Balochistan or in Sindh.

The Baloch and Sindh separatism in Pakistan has more to do with Pakistan’s power structure. While Islamabad is dominated by Pakistani Punjabis, the Balochs and Sindhis find their own political and economic aspirations getting repressed.

Balochistan, the laegest province in Pakistan, has been demanding independence for more than last six decades. Initially, pro-independence outfits in Balochistan used to attack only the Pakistani security officials. But with the CPEC investments like Gwadar port, Balochs have realised that Islamabad is selling the region to the Chinese. So, their agony is getting directed against Chinese businessmen and interests.

Liberation groups in Balochistan have targeted Chinese nationals and China-funded projects over the past two years or so. In 2019, the Baloch Liberation Army (BLA) claimed responsibility for attacking Zaver Pearl-Continental Hotel, a five-star facility which overlooks the Gwadar port and remains popular with wealthy Chinese interests.

The Pakistan Army too has failed to protect Chinese interests. In fact, the Pakistan Army can hardly protect themselves and last month, at least seven Pakistani soldiers were killed in Balochistan.

Sindh too has joined the struggle against CPEC. This region has its own reasons for pushing back against Chinese interests. Last year, it was reported that the Imran Khan government in Pakistan is looking to gift away two Sindh islands- Buddhoo and Bundal, to China. So, Sindhis has realised that Islamabad is selling their land to China out of its own compulsions. Therefore, Sindhis too hate both China and Pakistan.

Last year, Balochi and Sindhi pro-freedom organisations stitched an alliance to fight the CPEC project. Baloch Khan, spokesperson for Baloch Raji Ajoi Sangar (BRAS), had then said, “Sindh and Balochistan are equally affected by the expansionist and oppressive resolves of China. Through the China Pakistan Economic Corridor (CPEC), China aims to subjugate Sindh and Balochistan and occupy the coasts and resources from Badin to Gwadar.”

In fact, every project in Balochistan and Sindh with Chinese money may be vulnerable now. Take for instance, the Karachi stock exchange attack last year. A Chinese consortium of three stock exchanges holds 40 per cent stake in this stock exchange located in Sindh’s capital- Karachi. And who claimed responsibility for attacking the stock exchange? The BLA.

In fact, the BLA also claimed responsibility for the attack on the Chinese consulate in Karachi in 2018. So, the issue for China is that the Baloch-Sindhi alliance is proving to be a double whammy for Chinese business interests within Pakistan.

The alliance between Sindhis and Balochs is jeopardising Chinese investments in Pakistan. Also, attacks on Chinese interests and the growing security threat is bound to escalate the cost of CPEC projects in Pakistan. Pakistan can’t repay its existing debts, leave alone the possibility of repaying inflated debts caused by increased project costs. Balochs and Sindhis have thus put China in an awkward position. Their joint activism is challenging Xi’s expansionism.