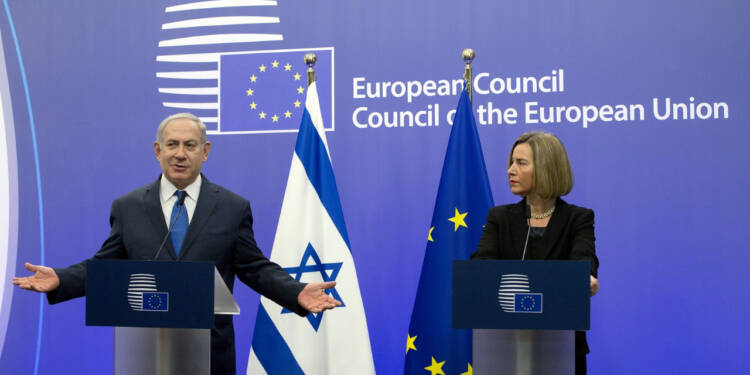 (Image Source: The Times of Israel)

Countries one after another are signing the Abraham Accords and if news reports are to be believed, Europe may very well join the league too. Europe has for a long time playing the game of supporting the Palestinians, under the reign of Angela Merkel. The Israeli Foreign Minister Gabi Ashkenazi is hopeful of improved Israel-Europe ties in 2021.

As reported by The Jerusalem Post, the Foreign Minister on Monday in a video conference with Israeli ambassadors in Europe said that “For years, European states connected developing relations with Israel to the conflict with the Palestinians.” He added, “The ministry’s goal has been to reduce the tension and the connection and continue advancing bilateral dialogue while dealing with the Palestinian issue.”

For a long time, the European Union has viewed its relations with Israel coupled with the baggage of the Palestine issue. Benjamin Netanyahu’s words during a closed meeting with the leaders of those friendly countries such as Hungary, Romania, Slovakia and the Czech Republic among others echoed the sentiment, “The European Union is the only association of countries in the world that conditions its relations with Israel on political conditions, the only one!”

Another instance of Netanyahu venting his frustration about the policies of European Union, was in 2017, when the Israeli premier warned, “If this were only about my interests, I wouldn’t have brought it up. Don’t undermine the only country in the region that is looking after Europe’s interests. Stop attacking Israel, support Israel.”

“Europe must decide if it wants to live and prosper or wither and disappear. I see you’re shocked because I’m not being politically correct,” Netanyahu told the EU leaders in an unprecedented tirade,“ he added. His frustration was on point, as the European Union was trying to act high and mighty even if it impacted its member countries more adversely.

All this coupled with the new reality of the Middle East dynamics making a sea change, has made Europe reconsider its policy standing and move away from its fixation with the Oslo Accords. The EU’s support for the Oslo framework could have been justified had it seen sustained progress towards a diplomatic breakthrough, or even a sliver of the same.

In truth, it has provided neither peace nor conflict management and just like all other policy continuations under Angela Merkel, it has been politically correct yet practically non-existent. Instead, the things have changed to the opposite end of what Europe has previously thought, which may have forced Europe to reconsider its policy direction. And the fact that it is coinciding with the retirement of German Chancellor Angela Merkel, makes a lot more sense.

Read more: It’s official that Qatar is not joining the Turkey-Iran axis and may soon sign the Abraham Accords instead.

The Foreign Ministry Deputy Director-General for Europe Anna Azari said, “We had two to three months of the reverse, even in an exaggerated way, that soon we will solve all our problems with Europe,” as the expansion in West Bank was suspended in favour of the Abraham Accords signed with the United Arab Emirates and Bahrain. Now that the dust has settled, the atmosphere for dialogue with European countries has significantly improved from where it was just a year ago, Azari added.

With the change in the mood on the Middle East and possible change in the leadership of EU for a more pragmatic France means that EU too will be able to de-hyphenate the relations with Israel from the Palestine issue. And as this happens going ahead, we can expect the organisation of the European countries coming to the table to embrace Israel.

Ladakh, Australia and Jack Ma – Jinping was hailed as a shrewd leader, but he has been exposed as a shortsighted dimwit