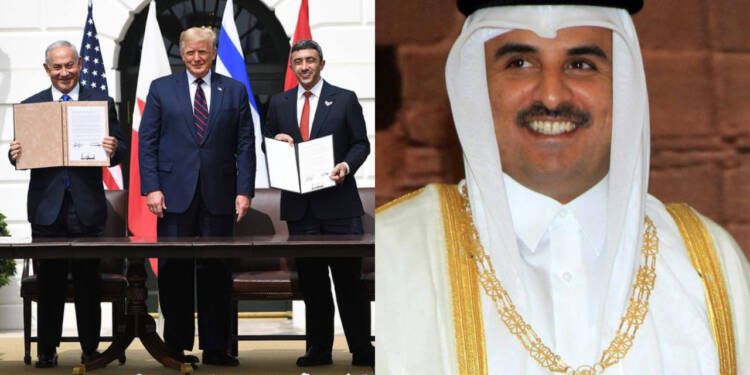 The Trump Administration’s Middle East policy has been turning into an even bigger achievement than one would have thought when the Abraham Accords were signed. This time Donald Trump’s son-in-law Jared Kushner has achieved something, which is bad news for the unholy axis of Turkey and Iran and good news for Qatar.

If news reports and their sources are to be believed, then the Gulf Nations have agreed to end their three-year-long blockade of Qatar. Gulf unity is good news for Gulf Countries, as well as, the US, as the blockade has created a huge rift among the US allies in the region, which was counterproductive and helpful only to the Iranians.

Saudi Arabia has opened its land border and set to open its air and maritime borders to Qatar on Monday evening as the first step toward ending a years-long diplomatic rift that deeply divided U.S. defence partners. As the countries are ending the blockade, it is sure to start the process of rebuilding the broken trust.

Qatar is no longer obliged to get closer to Iran and Turkey; it may end up softening its usually critical narrative against the Saudis and its allies. The shift in Qatari narrative will make it easier for Saudi Arabia to its normalise relations with Israel and will, in turn, provide a path for Qatar to join the Abraham Accords as well.

As reported by Times Now, an official, on condition of anonymity, said, “We’ve had a breakthrough in the Gulf Cooperation Council rift,” confirming an announcement from Kuwait. The six-nation Gulf Cooperation Council and Egypt “…will be coming together to sign an agreement that will end the blockade and put an end to the Qatari lawsuits,” the official added.

Kushner, the US point man on the Middle East, will take part in the signing at a Gulf summit in the northwestern Saudi Arabian city of Al-Ula, the official said. It will be in a sense the final gift of Kushner’s sustained diplomatic efforts to the Gulf countries and it will create a very strong and consolidated block in the Middle East.

This will lead to the emergence of a new Qatar and a new Gulf, and the fact that the gulf will turn into an impregnable fortress for the Turks or the Iranians to destroy; it is not good news for them. Keeping in line with Trump’s foreign policy, the US President is trying to bring countries in the Middle East together to isolate the Iranians, as well as, to show Turkey’s Erdogan, his place in the world pecking order.

Read more: No to Turkey and Iran, yes to Saudi and Israel: A new Qatar is going to emerge from the current crisis

Although, when the relations between the Gulf Countries and Qatar got sour in 2017, the Saudi led block forwarded 13 demands, which Qatar has still not accepted. However, with the US outreach and other incentives, the two sides have been brought to the table. Both have been told to mellow down their stance and for the time being, reach somewhere in the middle. The Saudis have been getting hefty military goodies by following Trump’s suggestions to them and the latest was that the US State Department gave its go-ahead for the potential sale of 3,000 precision-guided munitions to Saudi Arabia, in a deal valued up to $290 million.

As the signing is finalised, the things will become clearer as to what demands were accepted by the Qataris and what middle ground was reached. However, some things are apparent from the mere announcement of the signing of the agreement and that Qatar has been decoupled from the Iran-Turkey nexus and has been brought back to the consolidated US alliance system in the Middle East.

It is not just this, but the very fact that Qatar has joined back into the close-knit US alliance system, it will now be duty-bound to accept all the decisions and narratives that the USA believes are in the interest of the region. Thus, it will make it easier for the Saudi Arabians to formulate their relations with Israel and will make sure that no state can successfully portray Riyadh in a bad light. As that happens and the consolidation of the Gulf with the Jewish state of Israel becomes a norm, Qatar may as well sign the Abraham Accords.

Of coups and wars: Xi Jinping is about to force a war on China just to stay in power