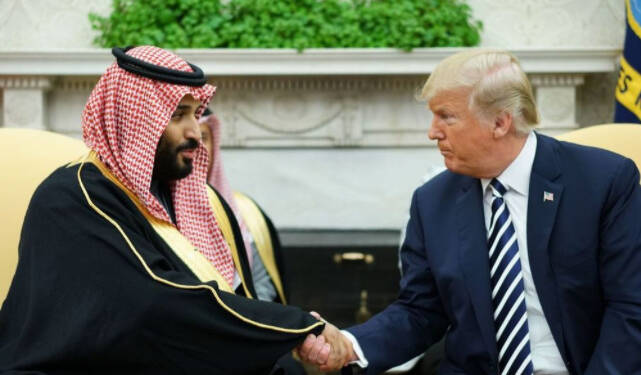 Trump’s Presidential tenure is about to end. Yet, the US President continues rewarding those who are promoting peace in the Middle East- arguably the world’s most conflict-prone region. This year, Trump managed to broker peace between several Arab nations and Israel, Washington’s non-Muslim ally in West Asia. Every Arab nation that made peace with Israel has been rewarded by Trump. And now it is the turn of the Muslim world’s undisputed king- Saudi Arabia to get rewarded.

As per Reuters, the Pentagon on Tuesday disclosed that the US State Department has given its go-ahead for the potential sale of 3,000 precision-guided munitions to Saudi Arabia, in a deal valued up to $290 million. The Pentagon has said that the potential sale will include 3,000 GBU-39 Small Diameter Bomb I (SDB I) munitions, containers, support equipment, spares and technical support.

Riyadh is getting rewarded for its role in promoting the Arab-Israel friendship, even though Saudi Arabia is yet to sign an Abraham Accord (formal peace agreement) with the Jewish nation. Yet, Saudi Arabia has prompted countries like Bahrain and Morocco to normalise diplomatic ties with Israel. Now, Riyadh is also forcing the non-Arab, radical State of Pakistan to make peace with the Jewish nation.

Trump’s latest gift, in fact, comes as a major relief for the Muslim Kingdom. Trump’s tenure is about to end and his successor, Joe Biden is expected to go tough on Riyadh. The 78-year old leader has even pledged to halt arms sales to Saudi Arabia in a bid to compel the Muslim Kingdom into ending the war in Yemen.

Yet, Trump is ensuring that the US ally has enough ammunition to sustain itself, even after Biden comes to power. The Pentagon said, “The proposed sale will improve Saudi Arabia’s capability to meet current and future threats by increasing its stocks of long-range, precision air-to-ground munitions.” It also said that the size and accuracy of the SDB I allows for an effective munition with less collateral damage.”

On Tuesday, the Pentagon’s Defense Security Cooperation Agency also notified the Congress about the potential sale. Trump knows that he is going to face the ire of Democrats in the Congress, especially in the House of Representatives where they have a majority. Earlier this year, the Democrats had even tried and failed to block the sale of F-35 warplanes to Riyadh.

Yet, Trump is bound to go ahead with the potential sale of 3,000 smart bombs to Saudi Arabia. After the State Department approval, the US and Saudi Arabia can now sign a contract for the delivery of the precision-guided munitions. Saudi Arabia has helped in resolving the historical Arab-Israel conflict, which has directed the Middle East towards peace and prosperity. Therefore, Trump will see to it that Riyadh gets rewarded appropriately.