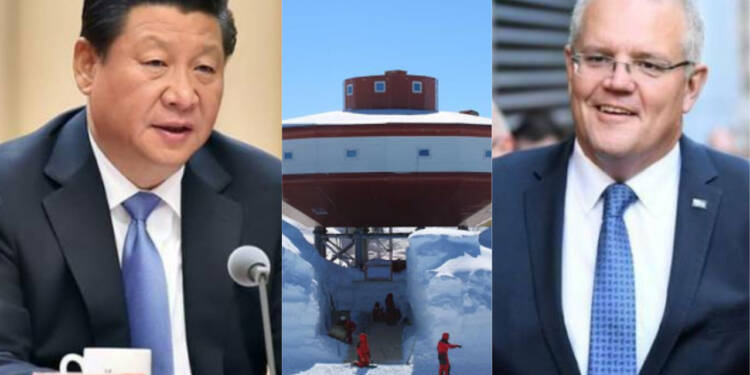 Australia, due to the current dynamics with the Chinese Communist Party, can critically analyse the Chinese presence near its strategic establishments. And as Canberra can look at things from a different lens, it has understood how China is working towards jeopardising Australian interests in Antarctica, among other places and become the dominant power and gains the lion’s share of strategically important geographies.

The Australian government is seeking expressions of interest for the construction of a 2,700-meter paved runway near Australia’s Davis research station in East Antarctica. The runway would support year-round air access between Hobart and Antarctica.

This has been brought under consideration, as just recently, both the USA and China were helping Australia with the extraction of an Australian expedition, which was suffering from a medical condition not related to COVID-19. It may be that, the inability to extract its own citizens, which gives China even more operating space and in future may very well embolden it to claim more of the uninhabited continent.

“The construction of a paved runway at Davis research station would represent a significant capability boost that would revolutionize our scientific activities and enhance Australia’s leadership and long-term interests in the region,” says the Australian Antarctic Division’s website.

Read more: China is helping Australia and the US in their Medevac program in a huge way. Cute right? But it has a sinister agenda.

In a paper published in mid-2020, researchers Shaun Brooks and Dr Julia Jabour of The University of Tasmania argued that Australia’s motivation to build the paved runway was primarily geo-political. They said, “It also has a solid physical and scientific presence, maintaining three large year-round research stations. But other nations are also vying for influence. China is constructing its fifth research station.”

So even though Australia claims about eight million square kilometres (or about 42%) of Antarctica and a 200-mile nautical zone, the increasing Chinese influence will increase the security concerns and may even lead to weakening existing claims.

It must be noted that notwithstanding the pandemic, a Chinese company- Shanghai Chonghe Marine Industry was acquiring the largest Antarctic krill-fishing boat to be completed by the year 2023. Krill, a tiny crustacean crucial to the Antarctic ecosystem as it forms a diet of several creatures in the region is already in danger due to increasing global demand. And now, Beijing is coming for it, after destroying its fishing zones.

The aims and problem both may sound ecological but the fact is that it is more geopolitical. Klaus Dodds, a geopolitics professor at Royal Holloway, University of London, says in much fear that “fishing is a proxy for minerals.” Presently, the Antarctic Treaty puts a complete ban mining but Russia and China both want this prohibition to be diluted. It is believed that while the present conversation revolves around Krill and fishing, it could be a precursor to the activities like mining.

Read more: The polar wars of China: Challenging Russia in the Arctic and Australia in Antarctica.

The Antarctic Treaty would be up for a standard review in 2048 and China is trying to set the ground from now itself. It wants to take the lead and be prepared to dominate the Southern Continent by that time ad as soon as 2048 arrives, it would like to dilute the treaty by its sheer diplomatic pressure, or so it hopes to achieve.

Within Australia, growing Chinese presence has been a cause of concern even before the pandemic. Professor Brady, who specialises in Chinese politics and its policies in the polar regions, said, “China is active all across this sector within East Antarctica, quite a sizeable chunk of what Australia calls the Australian Antarctic Territory.” China is also building its fifth base in Antarctica just outside the Australian claim in the Ross Sea.

As the Chinese belligerences coupled with its activities in East Antarctica mark a considerable increase, it has made Australia take some preemptive and precautionary measures to deal with any situation which China may create.