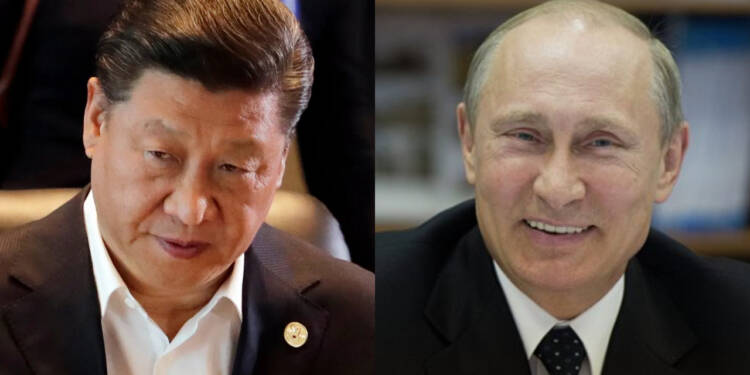 Last month, the Russian Ambassador to China Andrew Denisov had refuted and put down Chinese hopes of establishing a military alliance. China has been hoping to boost its defence infrastructure by expanding military relations with Russia. Beijing has been scared for quite some time now, with the QUAD countries knocking on its door and the European countries too, and is expanding their influence in the Indo-Pacific security structure.

China’s ambitions to build a formidable air force to challenge the likes of the US, India, Japan, and Australia suffered a major blow when Russia challenged and practically forced the Chinese government to use their engines in fighter planes which are of low quality and are basically of no use.

The authoritarian regime of the CCP has now forced its poor pilots to use the fighter jets that are doomed to fail. There is a strong possibility that these fighter jets might fail their pilots mid-air. China’s PLA Air Force is in the process of replacing the Russian engines which are currently fitted on the Chinese J-20 stealth fighter jets with its own engines.

The Chinese engines which are called WS-10C shall be put in the Chinese jets. Russia’s role in the whole process has been quite interesting. Russia had wanted China to purchase more Su-35 jets in exchange for the AL-31F engines which China has wanted for quite a long time.

China was at the forefront of buying Russian made Su-35 aircraft. It had purchased 24 of these aircraft for a hefty sum of US$ 2.5 billion whose last shipment was received in 2018. WS-10c, the Chinese engine which soon will power the J-20s is a replacement to the older WS-15s which were basically failures and had caused major embarrassment to the PLA.

China has been wanting to match the capabilities of its aircraft to those of the American F-22 Raptors, but the entire process has been full of potholes. The efforts to build the indigenous engines had started in 2006 but the entire research failed when the engine exploded during a running test back in 2015. The Chengdu J-20 fighter jets, which China proudly calls ‘Mighty Dragon’ is an inferior copy of the American F-35 with the identical blended wing-body front end and internally built, conformal exhaust pipes.

But even with all the copying, China could not develop the aircraft up to the Indian standards. The J-20 was hyped to be a high stealth fighter of the fifth generation, but it can only be classified as a mere 3.5 generation aircraft, as stated by Air Marshal R Nambiar who had tested the Rafale jets for India.

China had tried asking Russia to supply it with more advanced engines, but Moscow blatantly refused due to the Chinese intention of stealing the technology by reverse engineering as it has done again and again with other military hardware.

It’s clear now that China’s defence capabilities are suffering roadblocks and it is forced to incorporate low-quality machinery for compensating the Russian technology. The future of  Chinese defence ambitions looks dark as the QUAD and other allies are closing-in on Beijing.