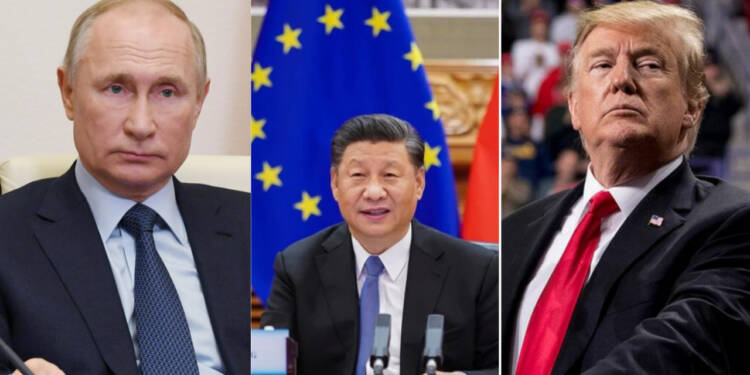 It is happening. The European Union (EU) is finally falling into China’s lap, and the warning bells must have started ringing in both Russia and the USA. After months of speaking up against Chinese human rights violations, the EU has now announced an investment deal with China. The investment agreement stands concluded after seven years of negotiations, and these are signs of the EU trying to assert itself as an independent or autonomous power.

China is looking to take advantage of the EU’s new approach that tends to push back both Russia and the USA. Washington and Moscow have competed for influence in Europe in the post World War II era. And to some extent, they still view each other as adversaries. However, the EU-China investment deal is a wake-up call for both these powers. Notwithstanding their own differences, the US and Russia have a common enemy to fight- China.

Read More: China is desperate to stop the EU from slipping away. Gives greater market access to prove its commitment

To put it very simply, the EU wants to grow independent. It wants to formulate its own policies independent of the Kremlin or the White House. But what the Brussels-based body doesn’t understand, or probably doesn’t want to understand is that China is deceiving it in the entire process. Look at the investment agreement- a few minor concessions that China has made are nothing more than a sham.

Beijing has made a few vague commitments like improving labour laws. Apart from that, the Chinese government didn’t agree on the more contentious issues like opening public tenders, signing the World Trade Organisation Government Procurement Agreement, or establishing an investment court system for handling investor disputes.

The EU has always been a playing field between Russia and the USA. The two big powers have always been lone competitors for influence in Europe, and now both Moscow and Washington are up against a new competitor.

Yet, there is a small window of opportunity for the USA and Russia here. The EU-China investment deal isn’t a concluded agreement. The approval process itself could go as far as 2022.

Meanwhile, the agreement will have to get translated into different languages, get officially approved by EU governments, the European Parliament and national parliaments. Every such stage will be an opportunity for the USA and Russia to use their influence in Europe and kick out China.

Read More: Why China is pushing the investment deal with the EU despite having clauses that go against the Chinese line

Now, here is the real thing- Russia and the US may not be friends. They are historical enemies. But neither the United States nor Russia can fight China alone. Even if the USA and Russia want to continue competing for influence among themselves, they will have to come together and squeeze China out of Europe.

And then, we must understand that USA, Russia and probably the United Kingdom coming together to ward off a common threat isn’t entirely unknown to human history. If these powers came together to battle Nazi Germany during World War II, then why can’t they join hands all over again- this time to fight what can be described as the Chinese version of fascism.

The EU-China investment deal isn’t good news for Russia or the USA. And such unprecedented times call for unprecedented actions like a US-Russia alliance to drive China out of Europe.