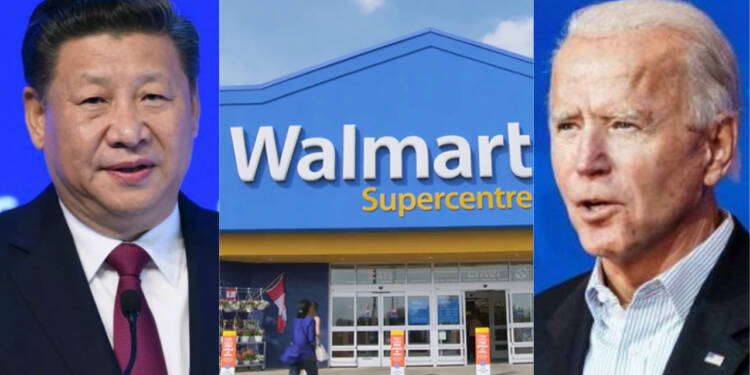 Capitalism, when transcends national interests can turn into profit-making and profit-seeking machine with blinders on. It was the sheer grit of the current US President Donald Trump, that forced US companies to put AMERICA FIRST! He had forced companies to move their businesses away from the Chinese mainland and to the USA or other countries which are considerate of American interests. However, as the days of Trump administration come to a close, and the date for Biden inauguration nears, companies such as Walmart are dumping American suppliers in favour of China.

#Walmart, in anticipation of #Biden's presidency, is cancelling orders it had placed with domestic suppliers and sending them to #Chinese factories. So Walmart flying the #American flag is cynical. It is really loyal to money and to #China. #CommunistChina #CCP #CCPChina

Gordon G. Chang tweeted, “Walmart, in anticipation of Biden’s presidency, is cancelling orders it had placed with domestic suppliers and sending them to Chinese factories. So, Walmart flying the American flag is cynical. It is really loyal to money and to China.”

The point to be noted here is that Walmart is following profit maximisation, even if it jeopardises USA’s national interests, and it is happening on the backdrop of Biden becoming the President of the USA.

The Chinese too are now optimistic about improved trade relations and are quite confident in the inaptness of the Biden administration’s strategic acumen. They are sure of the fact that the new US administration will allow China the liberty to increase its trade relations with US companies even if Beijing keep up slicing away the USA’s influence in Indo-Pacific and beyond.

The love for China in Wall Street and the capitalist community, given its cheap manufacturing systems, high value and a large number of consumers have been an obviousness. And in line with this, the Wall Street big shots tried to manage the situation and play the devil’s advocate, by trying to go against the executive order by the President of United States, while sitting in and operating from the United States.

As per SCMP, US-China relations, which have deteriorated to their worst point in decades during Donald Trump’s tenure, pushed China’s 2020 outbound acquisitions to their lowest level since 2007, falling behind inbound transactions for the first time since 2006, according to Refinitiv’s data. Deals into and out of China fell 5.5 per cent last year to US$81.9 billion, following a 40 per cent plunge in 2019.

However, even though Donald Trump had brought the Chinese economy on its knees, the fact that the Democrats may ease on the business side regarding China, means all this could be undone, much in the favour of Communist China.

Thus, the news that Walmart is cancelling orders it had placed with domestic suppliers in the USA and is shifting these requests to China, can be a precursor of what may become a norm in the Biden administration.