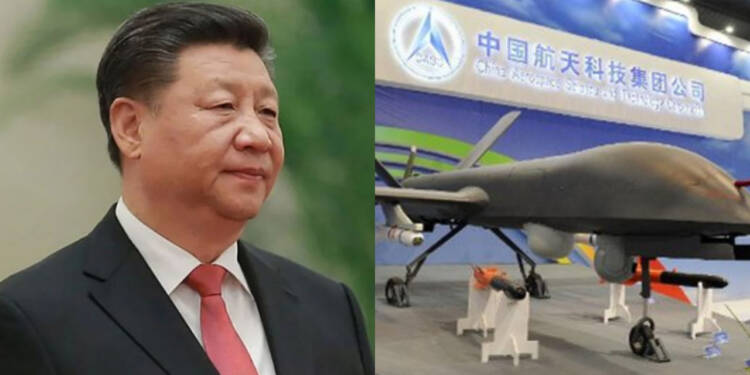 After following Chinese policies and its propaganda machinery, anyone could come to a very obvious conclusion i.e., the more the CCP tries to sell something, the less valuable and effective it is, and the extra advertisement is to compensate for the quality of the product. And the less China tells the world about something, that may very well paralyse the whole world quite some time, an example being Corona Virus aka Wuhan Virus. It is through this lens; one should see China’s declaration of its WJ-700 unmanned aircraft and drones, which could be armed with anti-ship missiles.

As per the Chinese Communist Party mouthpiece Global Times, “The WJ-700 unmanned aircraft is characterized by its large payload and ability to launch large munitions from outside hostile anti-aircraft fire coverage zone.”

This has to be taken with a grain of salt, as similar news had surfaced with the release of a Chinese drone back in 2016. The CH-4B, which was built by China Aerospace Science and Technology Corporation (CASTC), the CH-4B appears very similar to the General Atomics MQ-9 Reaper armed unmanned aerial vehicle, with Popular Mechanics noting in July 2016 it could carry, “up to 770 pounds of munitions, including the Blue Arrow 7 laser-guided air-to-surface missile, TG-100 laser, inertial or GPS-guided bombs, and the HJ-10 anti-tank missile.” As these explanations seem really similar, one can predict the future of the WJ-700 UAVs as the predecessor CH-4B even after all these boastings, was a failure.

The previous rip-off of China’s CH4B was advertised so vigorously that numerous countries, including Algeria, Nigeria, Jordan, Zambia, Iraq, Saudi Arabia, Ethiopia, Turkmenistan, the United Arab Emirates, Pakistan, and Myanmar bought it and after facing many problems, according to Flight Global, Jordan has complained about its drone fleet since 2018. According to Shepard Media, as late as November 2018, Jordan admitted it was “not happy with the aircraft’s performance and was looking to retire them.”

On the other hand, last year too, as per India Today report, China’s UAVs which have been exported to other countries have a bad habit of keep failing their consumers and have had a number of crashes. The Chinese have also been selling its drones to Algeria, Egypt, Ethiopia, Iraq, Jordan, Myanmar, Nigeria, Pakistan, Saudi Arabia, Turkmenistan, the UAE, and Zambia. Pakistan is the largest customer of Chinese drones with a 25 per cent share, followed by Egypt and Myanmar, with 23 and 13 per cent shares respectively.

Read more: No moral codes: China is cashing in on the conflict in West Asia with super-lethal Blowfish drones.

These precedents tell the exact story of China’s drone story and it also lets us know that China is not ready to produce such high tech which is not even available to the USA. However, its attempt to sell these UAVs as something very innovative is just a very cheap attempt to sell potato as pomegranate.