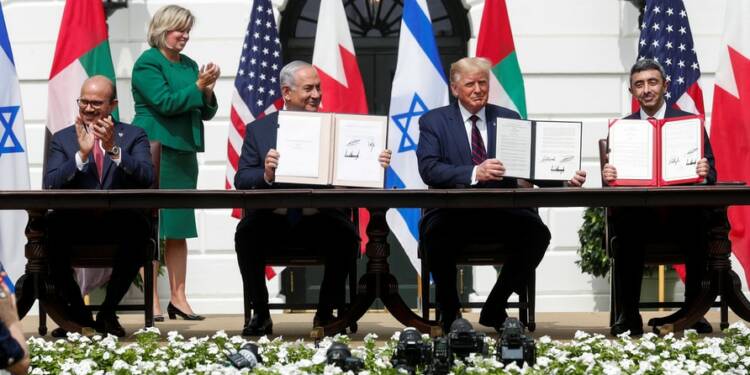 It is imperative to note that the Trump administration in 2019 recognized Israeli settlements in the West Bank as part of Israel, in contravention to decades of US policy. However, Washington does not have relations with the Gaza Strip, which is run under the authority of Hamas, which the US has designated a terrorist organization. Therefore by adding both regions separately in the Twitter handle – a signal was inadvertently sent by Joe Biden and his team that Democrats were doing a volte-face on Trump’s policy by bringing back Palestine on USA’s agenda and playing into the hands of Hamas and Hezbollah terrorists.

“It’s incredibly troubling the administration made this controversial move on Day One, w/o consulting w/Congress, It also seems to fly in the face of comments made by Antony Blinken yesterday. I strongly urge the president to clarify this provocative move quickly,” said Rep. Michael McCaul (R-Texas), the ranking member of the House Foreign Affairs Committee, on the issue.

LR @RepMcCaul "It's incredibly troubling the administration made this controversial move on Day One, w/o consulting w/Congress. It also seems to fly in the face of comments made by Antony Blinken yesterday. I strongly urge the president to clarify this provocative move quickly." https://t.co/7fGdDli18i

The growing Israel-US relations which reached a new pinnacle under the Trump administration will be tested in the coming few days. The Biden administration is keen on sitting across the table with Iran (a common enemy in the region that Israel, almost inherently detests) and go back to Obama’s days of the Iran-US nuclear deal.

National newspapers of Israel are already reporting that Jerusalem is warning that if America returns to the former terms of the nuclear deal with Iran under President Joe Biden, then this could lead the region into crisis again.

“If Biden adopts Obama’s plan, we will have nothing to talk about with him,” a senior Israeli official was quoted as saying.

Joe Biden is expected to reinstate the Iran Nuclear deal or Joint Comprehensive Plan of Action (JCPOA) which Trump threw into the bin and alternatively levied heavy sanctions on the terrorist country.

Reported by TFI, salivating at the prospect of a weak US leader who is certainly set to sit across the table with Tehran and ease down the sanctions imposed by Trump — Iran has resumed the operation to enrich uranium to up to 20 percent purity, to develop the nuclear bomb.

History has taught us that even when the JCPOA was in force, Iran continued to develop its nuclear arsenal covertly.

Israeli-American relations had touched a low-point toward the end of the Obama presidency, in large part due to Netanyahu’s clashes with the Obama administration over the Iran deal. And the relations aren’t off to a great start in the Biden era either.

Donald Trump has brought stability in the Middle East through the Abraham accords- peace deals brokered by the White House for the normalisation of relations between Israel and several Arab states. And if Biden flips on Trump’s policy, which seems imminent appearing by the change in the Twitter title of the handle and the overall stand of the Biden administration on Palestine — then Israel as well as, the Middle East, including the de facto leader, Saudi Arabia will be miffed.

A week before leaving the White House, Donald Trump was actively working with Netanyahu to decimate the Iranian influence in eastern Syria. Israeli forces conducted airstrikes in eastern Syria on Iran-linked targets with intelligence provided by the United States, suggesting both Trump and Netanyahu had finished on a high note.

However, all that is set to change. Despite Anthony Blinken, the new secretary of state pledging to senators at his confirmation hearing that he would engage with Israel and its Arab allies before reentering the JCPOA, as long as the Obama era Iran deal is on the cards, one cannot help but see Biden’s desperation to emulate Obama’s dastardly legacy. With this Biden is all set to skewer the USA’s ties with Israel and the Arab world, and bring to life again the issue of Palestine.

China laid low as Trump punished it in his last Presidential days. Now it celebrates Biden’s win with a cheap shot