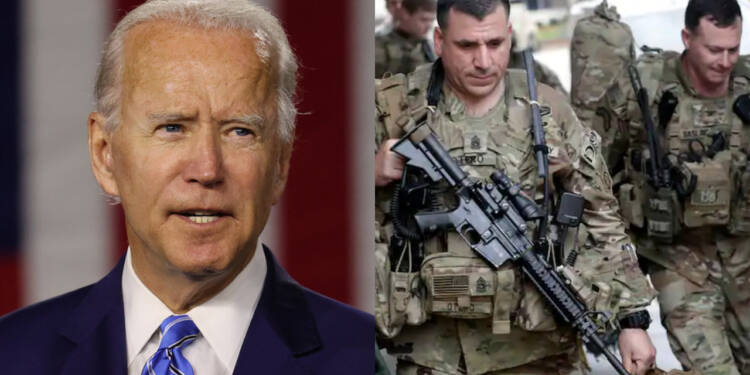 Remember, how we told you about the infamous war lobby coming back in Washington DC in November last year? Well, the transition has taken place in the White House, and it seems that the war lobby is now safely ensconced in Washington DC. And now, American troops will have to get prepared for being sent to far off lands, only to fight for the deep state.

So, here is the real thing. The former US President Donald Trump wanted to bring American troops home. He even committed to withdrawing 12,000 American soldiers from Afghanistan and leaving only 2,500 troops in the war-ravaged nation as a part of the US-Taliban peace deal signed in Doha last year. But the Biden administration is looking to review the US peace deal with the Taliban. This could mean that American troops will most likely stay back in Afghanistan.

Biden is known to profess the interventionist ideology, wherein the White House assumes the obligation of saving the world, by sending-in US troops to far-off regions. “Responsible withdrawal” is a term that is increasingly being used in the Biden administration which basically justifies keeping troops in Afghanistan for a longer period.

So, it doesn’t come as a surprise that the Biden administration has sought to review the US-Taliban deal. In fact, shortly after his swearing-in, the US National Security Advisor Jake Sullivan had a telephonic conversation with his Afghan counterpart Hamdullah Mohib.

On Friday, the National Security Council spokeswoman Emily Horne disclosed that during his telephonic conversation, Sullivan underscored that the US will support the peace process with a robust and regional diplomatic effort.

She added, “Sullivan also made clear the United States’ intention to review the February 2020 US-Taliban agreement, including to assess whether the Taliban was living up to its commitments to cut ties with terrorist groups, to reduce violence in Afghanistan and to engage in meaningful negotiations with the Afghan government and other stakeholders.”

The US NSA also committed to consulting closely with the Afghan government, NATO allies and regional partners. He also spoke about a collective strategy to support a stable, sovereign and secure future for Afghanistan. Again, Sullivan seemed to assert that the US will continue to play an interventionist role in the war-torn nation.

So, it is actually happening. Biden has just assumed office as the US President and he has already started reversing the gains made by Trump in bringing back American troops. Therefore, unlike Trump, Biden will be definitely deploying more troops for the peace process in Afghanistan. And so starts the deep state policy of sending American troops to far off lands to get slaughtered, while fighting for the deep state.