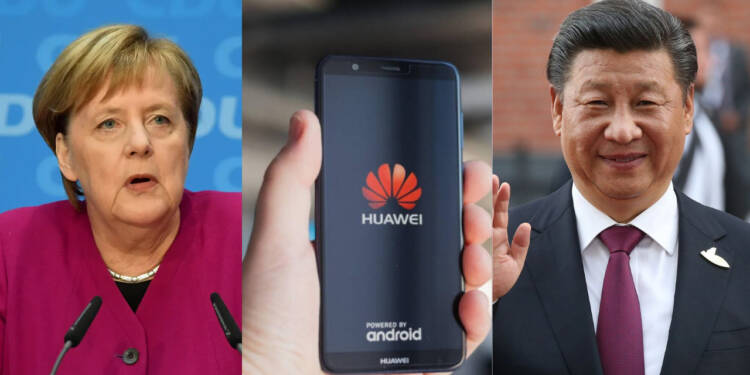 Germany under the disabled leadership of Angela Merkel has failed Europe and its own citizens too. The German greed for profit and their longing for the Chinese consumer market has led them to a place where they have sold all of Europe to Beijing. However, Germany and Angela Merkel for long on the surface tried to maintain a vile of deceit by portraying that they were critical of China on certain issues.

Now, as Angela Merkel is about to demit office, she has even done away with the deceit and is now openly supporting the Chinese Communist Party and Xi Jinping. The latest comes with Huawei sponsoring the CDU (Christian Democratic Union) state Party convention in the state of Baden-Württemberg. While all the European countries and even the countries around the world are sending the Chinese government’s 5G giant packing, Germany and more precisely, Angela Merkel’s political party is using Huawei’s funds to fight domestic elections in Germany.

Huawei is sponsoring the CDU state Party convention in the state of Baden-Württemberg. Not a great look. https://t.co/sOvL0PyeFx

Although her support was obvious with the European Union signing the trade deal with China, the current occurrence is very different, as Germany’s CDU in 2019 had decided to not welcome Huawei as a sponsor of PR booths at CDU annual conventions. However, these latest visuals tell a crystal-clear story that China has made it back to being an important ally of at least the political party that Angela Merkel comes from.

Huawei is the Chinese Communist Party’s proud partner in Xinjiang repression and shouldn’t be allowed to co-brand with any democratic party taking its values seriously. But Angela Merkel has got her priorities right, nothing is bigger than cold hard cash, and even if it takes to make Europe a colony of China, so be it.

After the deal between Europe and China was confirmed, Germany itself came under the target of several EU member states. According to a report by Politico, countries like Italy, Poland, Belgium and Spain accused Germany of ignoring their interests and confirmed the deal, at a time when Merkel is about to reach the end of her tenure. Here the question arises that why was Merkel adamant on making this deal firm?

It has now been revealed that Germany was offered some special advantages by China to ensure this deal. According to a report by the German portal Wiwo, there is a high possibility that German company Deutsche Telekom can get the license to manufacture mobile phones in China. It may become the first non-Chinese company in the world to get this opportunity in China.

Read more: Has Angela Merkel received kickbacks from China to get the Sino-Europe investment deal done?

When the Europeans will look back decades later and try to find who was responsible for Europe making the absurd foreign policy decisions, Angela Merkel will be seen as an egotistical leader, who thought that she had the upper hand in the compromises and deliberations with the Chinese. But due to her being blinded by her own ego, she compromised the whole continent and made it a glorified colony of China.