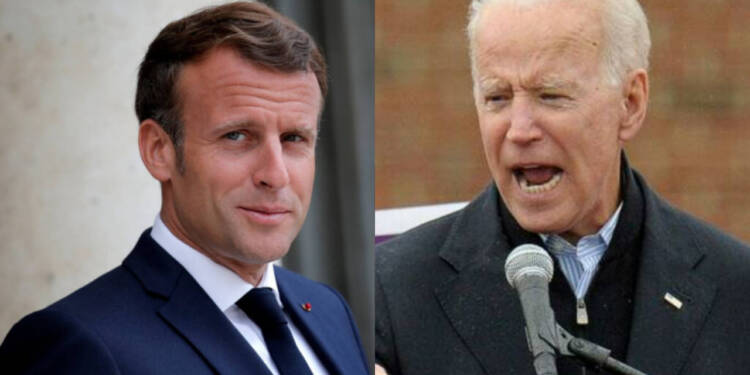 After messing up things domestically, Joe Biden has started his international stride. The new US President spoke to his French counterpart Emmanuel Macron and discussed his willingness to act together for peace in the Near and Middle East, in particular on the Iranian nuclear issue. In addition to this, Joe Biden reaffirmed the USA’s commitment to the North Atlantic Treaty Organisation (NATO), which was once a bone of contention between Trump and Europe.

This recognition of France has given Macron such a position in the geopolitical game of the Near and Middle East, that it can now influence the policies of the USA in the region. Similar to how France is working towards replacing the USA in the Quad, given its U-Turn from the Trump era commitment to the Indo-Pacific allies, it will use discontent among the Middle Eastern allies of the USA to corner Turkey.

Read more: Macron and Johnson want to join QUAD now because they know that the NATO story is over.

With Joe Biden’s policies against Arab Countries and especially Israel, the overall strategy of France will be to push Biden towards cornering Turkey. Thus, as France uses discontent among the Middle Eastern allies of the USA to force its hands against Turkey, it will set a stage for France-USA clash in the region as Marcon does not look in a mood to toe to Biden’s line and give Turkey a free pass.

According to the statement from the Biden administration, in his recent phone call with Macron, Biden emphasised “his commitment to bolstering the transatlantic relationship, including through NATO and the United States’ partnership with the European Union.”

Interestingly, on the other hand, the Elysee palace said that the two leaders also discussed “their willingness to act together for peace in the Near and Middle East, in particular on the Iranian nuclear issue.”

With this move, Macron is making the USA’s priorities for the Middle East clear to the regional allies, so that it can fully capitalise on the discontent in the region and force USA’s hand to take tough action against the Erdogan-led Turkey. This phone call has made it absolutely clear that going ahead, the Middle East is going to become the stage for a grand France-USA clash.

French President Emmanuel Macron knows how the disastrous Biden Presidency can lead to a demise of the Western liberal model and he is not ready to relent. He is ready to clash with the USA in the Middle East and resolute to safeguard the allies of Western powers, by forcing Joe Biden to maintain the Trump’s policy for the region, as well as force Washington’s hands-on Ankara for its destabilising activities.

Macron is also pushing the issues such as globally consistent taxes on US tech companies such as Google and Amazon and the tit-for-tat tariffs over subsidies to US planemaker Boeing and its France-based rival, Airbus.

With Merkel demitting office this year, Macron is standing tall with the surety of him becoming the leading the European Union. At a time when the region is suffering from an acute leadership crisis, he seems to have made up his mind to lead the western liberal block. Macron is thus, emerging as a leader who is willing to fill the gap which Biden is sure to leave in the Middle East and Eastern Mediterranean where Turkey has been a major destabilising factor.

Canada joining Quad exercise is terrible news for the world, as Trudeau’s love for Jinping is not lost on anyone