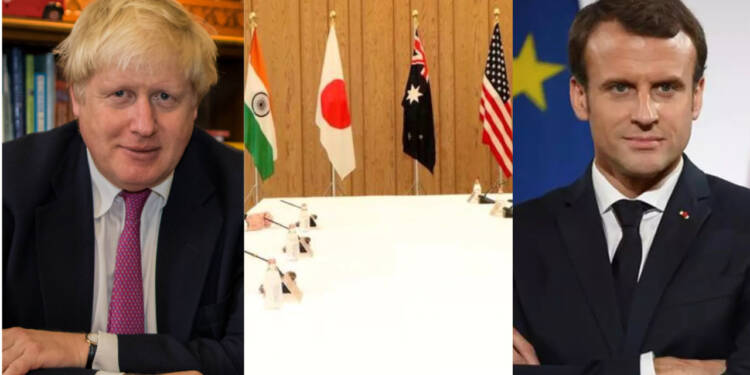 The changes in Europe and US relations are becoming profound. Even the differences among the European Union countries too, which is best understood by the successful exit of the United Kingdom from the EU. The BREXIT phenomenon is a major shift in how Europe acts and how the future geopolitics is played. The one fact is that NATO has become a thing of the past, as recently many member countries have been garnering irreconcilable differences and looking forward to organisations like the Quadrilateral Security Dialogue (QUAD).

As the future of both EU and NATO look bleak, French President Emmanuel Macron and UK’s Prime Minister Boris Johnson are looking for moving closer to the QUAD and put their geopolitical weight into the Indo-Pacific and shortly may even join the QUAD.

While the reports mention that the UK is understanding the importance of India in the post-BREXIT scenario, the French are also increasing their strategic engagement with the QUAD countries. The UK and India are near signing a significant milestone towards a Free Trade Agreement, as well as, the UK is engaging in the Indo-Pacific by sending its Naval Ships.

The French President’s diplomatic advisor Emmanuel Bonne’s visit to India recently, in itself, is a big deal as he does not make public visits and when he does, it is if the country holds immense importance for the French. France, too, is increasing its geopolitical clout in the Indo-Pacific and is also engaging with countries. An example can the planned Naval exercise with the USA and Japan in the East China Sea, an indicator of their lean towards the QUAD.

In line with this, Britain and India are close to signing an Enhanced Trade Partnership deal, a key step on the road to a Free Trade Agreement between the world’s fifth and sixth biggest economies. It was rumoured that the deal was to have been signed during Boris Johnson’s now-postponed visit to Delhi at the end of this month.

One top UK source confirmed, “We are not a million miles away – we’re close.” Trade between the countries is already worth £24 billion a year and while it is crucial to Britain’s post-Brexit future, the deal is only part of a strategic shift that will see the UK place itself at the centre of the world’s democracies to fight China’s influence.

And as per the same report, one of the steps in this direction – joining the QUAD, a strategic partnership between the US, Australia, India and Japan, is also on the cards.

Read more: How Macron has changed the game in the Indo-Pacific with talks, trade and military ties with important countries.

James Rogers, ex-head of the Global Britain desk at the HJS think tank, said, “There is a perfect confluence of circumstances which allows the bringing together of democracies to confront our main challenges: China’s technological innovation.”

Former International Trade Secretary Dr Liam Fox too indirectly indicated Britain’s growing interest in the QUAD. He said, “We’ve been working with India since I was trade secretary on enhanced economic co-operation. Though our economies were too far apart for an FTA, we agreed to look at it sector by sector to make it easier to agree on an FTA in the future. This is an important step.”

The French President’s diplomatic advisor also said that there cannot be any role for the NATO in the Indo-Pacific. This can also be seen as a signal that NATO is so redundant that it cannot partake in the new geopolitical contours. And as this happens, the French and the Britons wouldn’t want to lose out with the rest of Europe. Thus, they want to join the QUAD and are taking actions in line with the same.