Was Aung Sang Suu Kyi punished for being a Chinese puppet and antagonizing other powers in the region? 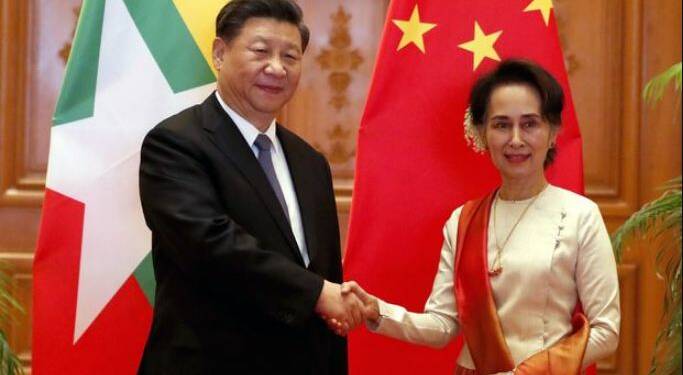 As of late, the military in Myanmar has been pushing for close collaboration with the Indians and the Japanese. The military leadership, on the other hand, has been very critical of China and has time and again flagged its concerns of Chinese involvement in arming the secessionist and insurgent groups. However, on the other hand, Aung Sang Suu Kyi has long been in the good books of the Chinese Communist Party, with the Global Times showering praises on her back in 2015 during her visit to China. And even in 2020, it was Suu Kyi who met Xi Jinping during his historic visit to Myanmar.

However, in recent months, the Burmese military has become more and more vocally critical of China. And it has simultaneously supported increased investment by Japan and India within the country as well as accepted Japan’s role as a mediator between the insurgent groups and the government. Thus, while we connect the dots, it makes sense to think that Aung Sang Suu Kyi may have been punished for being a Chinese puppet and antagonized the domestic populace and even the other powers of the region.

In mid last year, the Myanmar Army spokesperson alleged, “one foreign country” is providing sophisticated arms and financial support to Myanmar based insurgent groups. Brig Gen Zaw Min Tun- the spokesperson for Tatmadaw (Myanmar military) said that – Arakan Army, Ta’ang National Liberation Army, the Kachin Independence Army the Shan State Army-North, and United Wa State Army (UWSA) – all of which are ethnic rebel armies based in Myanmar’s northern province which share a border with China’s Yunnan province – are being supported by Chinese businessmen and the Chinese Communist Party. Min Aung Hlaing, commander-in-chief of Myanmar’s military, travelled the world — India, Russia, Serbia, Germany and Austria in the years after the country returned to nominally civilian rule after 2015.

Read more: China has plans to turn Myanmar into another Pakistan, but people of Myanmar won’t let it happen.

In addition to this, the Japanese have entered the country with an investment of more than half a billion USD. This has come at the cost of China, given how aggressively Beijing has tried to gain total dominance of the local economy. The Chinese fears are two-fold, one – these investments by Tokyo have come just after New Delhi had gifted a submarine to the Myanmar Navy and at the backdrop of continued Indian investments in the neighbouring country. And two, China thought that the victory of Aung San Suu Kyi – a Chinese confidant, would flip things in China’s court, but even after her victory, Japan got the contract. This is a really big blow for Beijing when one connects all the dots.

The Japanese and Indians have become a lot closer to Myanmar and more specifically to its military which has welcomed these two countries with open arms as they will act as countervailing forces to the Chinese attempts to gain influence within the country. At a time like this, Suu Kyi was inclined to gaining influence of the Chinese and in turn, counter the military power. It seems this is the attempt by Suu Kyi which must have flipped the generals. Aung Sang Suu Kyi punished for being a Chinese puppet and antagonizing other powers in the region.

Biden’s Secretary of State Antony Blinken seems to be a Trump fan, or rather Pompeo 2.0

Obama hated Netanyahu. Biden doesn’t love him either. But Netanyahu hates them both equally