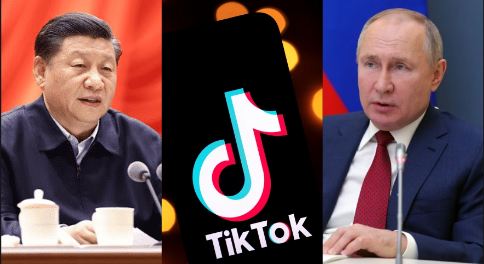 The past years have seen multiple flashpoints emerging between Russia and China, ranging from China’s attempted crashing of Moscow’s vaccine diplomacy by colluding with the World Health Organization (WHO), the border dispute, among others. However, the recent developments may very well become the tipping point. Although the Russian government has been vigilant about the activities of most of the online spaces (given their origin and operations emanate from the USA or other western countries), TikTok has remained relatively out of authorities eyes.

In recent months, TikTok has become THE platform for anti-government protests and a haven for activists. While looking at this, one cannot deny the implicit involvement of the Chinese Communist Party, given it controls what goes on TikTok and how its parent company ByteDance acts.

TikTok, a short video sharing app operated by Chinese company ByteDance, has run into trouble in countries like India and the United States. Even the Islamic Republic of Pakistan, a Chinese Client State in South Asia, has blocked TikTok for allegedly failing to comply with instructions for “development of an effective mechanism for proactive moderation of unlawful online content”. Although the reasoning has been different in different countries, the fact that this app had far and wide impacted the societies of these countries that had triggered them to act against it.

Read more: Is Russia going to ban TikTok next? Well, there are very clear signs

The social media app, TikTok has over 20 million subscribers in Russia and coupled with the app algorithms which create silos and foments the flames even further. This is the exact thing happening in Russia right now. The app has become a catalyst for the anti-government and pro- Alexey Navalny protests. On last Wednesday, Roskomnadzor said social media companies would be fined “for failure to comply with the requirements to suppress the spread of calls to minors to participate in unauthorised rallies”. Despite the request of the prosecutor general’s office and the notification from Roskomnadzor, these internet platforms did not remove in time a total of 170 illegal appeals,” a statement from Roskomnadzor said.

In 2019, TikTok pledged to co-operate with Russian authorities, following the announcement of a probe by Russia’s State media regulator into whether the Chinese app distributed child pornography or any other banned content. However, in September this year, a TikTok executive seemed to criticise the Russian laws. TikTok’s Director of government relations and public policy in Europe, Theo Bertram, told British legislators, “I think the Russian law is terrible and our community does too, and they strongly voice that on the platform.” Bertram added, “But unfortunately we have to comply with the legal requests in the country we operate.”

The fact that it is an app run by the Chinese Communist Party that can amplify the protests happening at around 100 cities. This is a dangerous development, and given the consistent efforts by Beijing to devolve the Russians as secondary partners in their bilateral relations, it is sure to ring bells of caution in Moscow. China had earlier tried to steal military technology from Russia and tried to derail its foreign policy priorities, however, with the latest development, the Chinese seems to have actively started mischievous activities in the domestic realm of Russia. And given the nature of Vladimir Putin, he will not accept this digression and can lead to a long fermenting fallout between Beijing and Moscow.