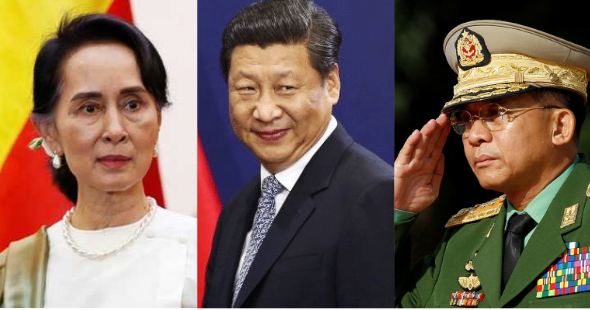 The world is opining against the sudden coup in Myanmar and the detention of Aung San Suu Kyi, but one country that has been notorious at supporting the wrong side is China. The significance of the current development is the fact that China for a very long time has been at loggerheads with the Burmese military, yet the CCP mouthpiece has termed the overt coup as merely a ‘cabinet reshuffle’ and even blocked the United Nation’s condemnation of the incident.

The Chinese are finding it refreshing that the USA’s attempted politically correct stance has made it difficult for even allies like India and Japan who have been investing consistently in Myanmar to make a reconciliatory approach. The Chinese have sensed this tension and are showering their love and support on the military so that it can capitalise on this divide and accomplish its much-awaited China Myanmar Economic Corridor (CMEC).

The Chinese have already developed a pipeline for the supply of oil and gas via Myanmar. And, given its strategic importance, China can go to any extent to make sure that Burma lets it build its infrastructure so that it can gain direct entry to the Indian Ocean Region from the populated region of Yunnan. Sino-Myanmar pipelines refer to the oil and natural gas pipelines linking Myanmar’s deep-water port of Kyaukphyu (Sittwe) in the Bay of Bengal with Kunming in Yunnan province of China. In addition to this China wants the country to cooperate with it and give it a passageway to the Indian Ocean.

However, given the fact that China funds the insurgents and terrorists within the Burmese territory, the Myanmar military has been really critical of these actions and has even overtly mentioned these issues.

Last year, the Myanmar Army spokesperson alleged that “one foreign country” was providing sophisticated arms and financial support to Myanmar-based insurgent groups. Brig Gen Zaw Min Tun, the spokesperson for Tatmadaw (Myanmar military) said that Arakan Army, Ta’ang National Liberation Army, the Kachin Independence Army the Shan State Army-North, and United Wa State Army (UWSA) – all of whom are ethnic rebel armies based in the country’s northern province and share a border with China’s Yunnan province – are being supported by Chinese businessmen and the Chinese Communist Party.

Read more: China has plans to turn Myanmar into another Pakistan, but people of Myanmar won’t let it happen.

This overt criticism of the Chinese Communist Party’s involvement with the insurgents shows that the Myanmar Army’s critical view of the CCP is a good sign for India-Myanmar relations. Myanmar has been cooperating with India in joint operations to destroy the terror camps operated by the Arakan Army on the Indo-Myanmar border who pose a possible threat to the ambitious Multi-Modal Transit Transport Project. India and Myanmar share a good deal of security cooperation and the Armies of the two countries have also worked together in striking the NSCN-K (National Socialist Council of Nagaland-Khaplang) camps within Myanmar.

Read more: Myanmar- The next-door neighbour which could fall into China’s trap if we don’t help

The CCP had earlier tried to entice the Aung San Suu Kyi faction to gain influence in the country. It knew that with the military influence, she would be more receptive of Chinese interference. However, with the coup turning the military into the enemy, the Chinese want to use this opportunity to get in the military’s good books and start the decade-old stalled CMEC project.

Trump might be off social media, but his trusted lieutenant Pompeo is not, and he is ensuring that Trump’s voice reaches the masses