Trump might be off social media, but his trusted lieutenant Pompeo is not, and he is ensuring that Trump’s voice reaches the masses 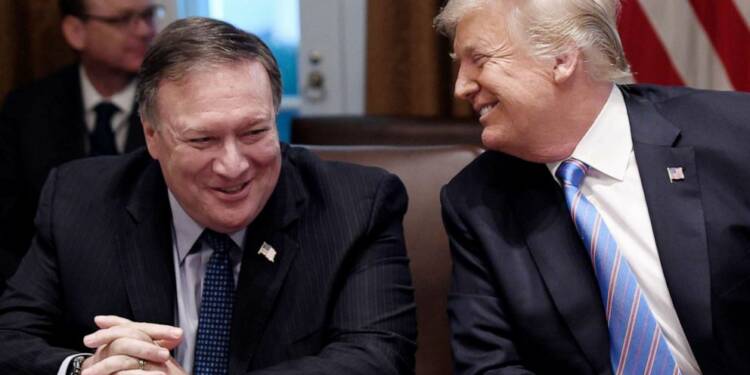 Trump has been ostracized by the American political elite and has been silenced even on social media- the only medium of uninterrupted communication between Trump and his supporters. So, has the Deep State successfully managed to sideline the Republican leader? Fortunately, no. Trump’s trusted lieutenant, Michael Richard Pompeo is still not off social media and he is ensuring that Trump’s voice reaches the masses.

Having served as the Central Intelligence Agency (CIA) Director and later as the Secretary of State under Trump administration, Pompeo has religiously imbibed Trumpism in his own persona. Now, as Trump stands banished, Pompeo is becoming his voice. Trump speaks about issues like Chinese expansionism and how the Trump administration confronted it. As such, Pompeo is keeping up the pressure on the Biden administration and ensuring that the sitting US President isn’t allowed to go soft on Beijing.

Pompeo is mighty popular on Twitter. His official Secretary Pompeo handle had 3 million followers. It was active till January 20 and now it stands archived. But his private handle too has a little less than 1 million followers. From this handle, Mike Pompeo keeps propagating the views of his former boss, Donald Trump.

One of Pompeo’s tweets read, “Not only has the CCP destroyed millions of American jobs, but they’re behind the gates. They’re lobbying members of Congress. They’re working our school boards and city councils to try and change our way of life.” The former US Secretary of State added, “We, along with our allies, must take the China threat seriously.”

Not only has the CCP destroyed millions of American jobs, but they’re behind the gates. They’re lobbying members of Congress. They’re working our school boards and city councils to try and change our way of life.

We, along with our allies, must take the China threat seriously.

So, here is the real thing- when Trump was in power, Pompeo was regarded as the biggest China hawk. He spoke aggressively against China, probably even more than Trump. Simply put, Pompeo has been the biggest nightmare for the Chinese Communist Party (CCP). He led from the front and launched a blistering attack on the Chinese Communist ideology and even managed to bring together all American allies on a common platform against Beijing.

But even now, Pompeo remains a China hawk though he is no longer the Secretary of State. The fact remains that Pompeo is China’s ideological foe and he will continue Trump’s campaign against China.

Pompeo will never let Americans forget what China did to the US and the world at large. The Republican leader will keep telling Americans that the CCP created the Wuhan virus that led to hundreds of thousands of deaths in the United States of America, apart from rendering millions jobless.

Pompeo is also ensuring that China remains a political and electoral issue within the US. He is reminding Americans that Beijing is a threat to the democratic world and that the White House is obliged to coordinate with American allies in order to keep the paper Dragon in check.

At the end of the day, the burden of Pompeo’s articulation falls on Biden. With Trump silenced, Biden would have been feeling that he has acquired greater maneuverability. But that is clearly not the case, as Pompeo is not letting Biden off the hook. Biden, therefore, remains on the edge as he won’t be allowed to go scot free, if he doesn’t take the American campaign against China forward.

As such, Trump may have been silenced for now but Trumpism lives on, as Pompeo ensures that Trump’s voice reaches the American masses.

Five Problems of China that Biden solved in 15 days